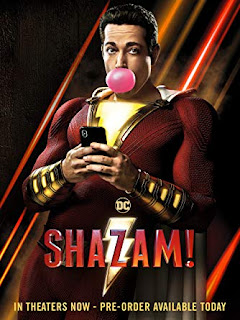 So here we have the original Captain Marvel that strangely under very different lawsuits became a Marvel character and DC had to change the name to Shazam. The story of a young boy given extraordinary powers from a powerful wizard, that powers rival Superman's and even in different DC comic variations has battled Superman. With a famous Villian Black Adam which is not even featured in this movie.
What we do have though and personally in my opinion is the best and most genuine movie in the DC franchise, that will always be in second place to Jason Monmouth's Aquaman, which I thought was a pile of shit with style over substance becoming the apparent.
Shazam has heart, it is funny It is Tom Hanks Big mixed with Christopher Reeves Superman, the story of Billy Batson, a child abandoned by his mother early on,being a troubled teen who has run away from multiple care and foster homes, who on a fateful night standing up to bullies protecting his disabled foster brother he is picked by a powerful wizard to become the all powerful Shazam, to protect the world. The only difference is that Shazam is now a thirty something dude, not a fourteen year old boy anymore,  the problem is learning being an adult with child like sensibilities is always going to be a problem especially learning your super powers and like a child wanting to show them off, Zachary Levi is brilliant in this role giving of the child like innocence, and learning the famous quote with great power comes great responsibility. The other great performance is Jack Dylan Grazer as his foster brother. As I said this film has all the heart of Big, with some great slapstick gags, and some surprisingly good action pieces, a film that should've been a throw away film, that is actually very very good, and is my favourite film in the DC cannon.
4/5****