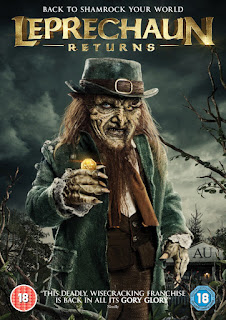 Did the world really need another Leprechaun movie with this I believe the ninth in the series, not really but this revamped version isn't bad, and like the recent Halloween movie ignoring all other sequels with this being the same is a direct sequel to the 1993 Jennifer Aniston film. One thing is missing is Warwick Davis only to be replaced by Linden Porco, which is a little disappointing but the film is still enjoyable all the same. In all fairness you get from this film what you expect, a daft gory horror with its tongue firmly in cheek. The story of spring breakers in the middle of nowhere deciding to ditch modern technology for a few days and deciding to go green by using the drinking well for fresh water to only unleash the devilishly dangerous Leprechaun again and he is determined to locate his gold that is in the grounds of the house. We see plenty of ingenious kills, lots of blood and gore and plenty of laughs too, it is also nice to see a horror film in the UK to actually have an adult rating instead of the current splurge of PG13 horror films from America mainly the Blumhouse camp.

This film is OK though and will easily fill up an hour and a bit of your life, and is actually quite enjoyable. ***