I had little hope for this sequel as it turns out now, from the Blumhouse camp, and from a screenplay by Parks And Recreation writers, and in fairness hands in air I was wrong to pour hate on a project which was outstanding to watch.
Halloween 2018 is a masterstroke a direct sequel to the original 1978 version, the other films now do not matter or exist in any time line, this is the true sequel, and the reason this works one actress Jamie Lee Curtis , who after just reading four pages of the script signed on to reprise her role once more, and a role that is honest. She plays Laurie Strode perfectly, a woman destroyed by the events in Haddonfiled 40 years previously, unable to form any credible relationships, two failed marriages, a dysfunctional relationship with her own daughter, and why because of the Bogyman. Proving post traumatic stress is something impossible to get over, and this being in the form of Michael Myers, who Laurie believes will come after her again one day, as she lives a nomadic existence in a survivalist homestead, full of hidden doorways, cell doors to every room, and enough ammunition to give Sarah Conner a run for her money. I'm not going to give plot details away, but it is obvious that Michael gets out from his forty years in a mental asylum and the monster is still there, and proving he is the most evil, sinister and calculating killers on our screens, with some great kills, some which are off screen, and is better for it.

The atmosphere is there once more, Michael is once again terrifying, the Shape is back, and this film although a sequel is without doubt the best film aside the original 1978 version.
It isn't completely perfect, then again name me a film which is, it has some gaping plot holes, like how does Michael find Laurie in the middle of nowhere, and coincidences that he happens to come across the same documentary crew at the same gas station who still happen to have his mask. These are small things that can easily be overlooked as the rest of the movie is outstanding, with a revised score once more from John Carpenter and son, and executive producing credit at least he was involved in the making of this film, a film that I thought would be a travesty of justice, but actually doing the source material justice is why this movie needs to be seen.
4/5**** 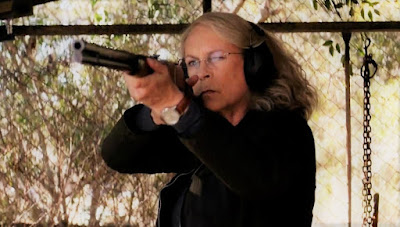