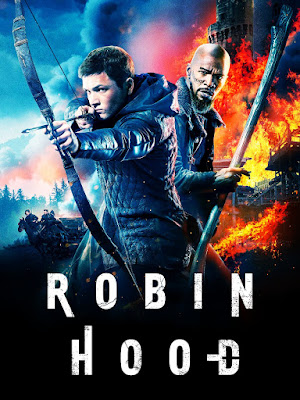 I'm gonna be honest I watched this whilst having a few beers and some Jack, but unlike some I feel I notice more and have a more enlightened experience whilst being a little drunk, in all fairness I think I needed to be as all the negative press about this movie is actually true.
I so wanted to like this film starring Taron Eggerton and Jamie Fox, in a steampunk version of Robin Hood, the trailer looked decent and drew you in, unfortunately the parts they showed are the best bits,  as the dialogue and script, plotting is non existent, even confusing, I put this down to my alcohol consumption but after a quick watch of certain scenes again sober I realized they still made no sense. The editing is annoying with a jump cut, fast edit, fast motion style of filmaking last seen 12 years ago in 300, to which other film makers have since moved on from. We have a film that is so heavily reliant on CGI for every backdrop, and still looking extremely cheap considering this movie cost upwards of 90 million dollars, plus probably the same again in marketing costs, this is a very expensive flop of a movie and rightly so. A film one hour in I thought we were nearing the final third and climax  but soon realising there was still another 50 long minutes to go of nonsensical drama, dialogue and ridiculous set pieces that are so frantic it's hard to know what is going on onscreen.
This film was crying out to be noticed, a film unlike any other, with great actors and yet still failing, maybe with different direction with an action director who can actually do action, and the fast edit someone like Mathew Vaughan would've been perfect for this, with maybe a script by his writing partner of Jane Goodman this film would've worked. Instead we have this release that should've been shelved, and released quietly on VOD and DVD instead of a theatrical release on Thanksgiving weekend, proving this was the biggest turkey on the table that weekend, and even on the home release market it is still one to be avoided on DVD and Blu-ray unless it appears soon as a supermarket markdown special.
2/5**