With critics hating this movie, but audience anticipation refusing to ignore these dam critics giving this movie a well deserved thumbs up. Yes this movie has some flaws, the first third is a little slow and drawn out,with most of it being character driven. Once this movie kicks into gear it is non stop, and this is where Tom Hardy comes into his own, with his character Eddie Brock is center stage rather than just seeing a CGI fest with Venom, this makes the film more enjoyable as he is fighting this being inside him and having no control, to a point that Eddie and Venom actually have a mutual respect for each other.

The CGI fest at the end with the battle between Venom and Riot seems tagged on, and from all reports the original filming of this had less Venom air time and more Tom Hardy, yet more scenes were filmed to please the fan base. Although this still has to be confirmed I can see where these rumors came from as the middle of the movie has hardly any Venom moments, more Eddie Brock dealing with his body changing. This is the bit I personally enjoyed the most, then again this is why this movie is so divisive between critics and fans, most fans and neturals love this movie, critics don't like it, I'm with the former, I'm a massive Spider-Man fan, I grew up with the best cartoon series of the late eighties early nineties, I grew up with Venom being a massive character in this cartoon, I saw Venom being the bad guy, and being the good guy, well this film brought together the best of both, fleshing out Venom and Eddie Brock perfectly to bring one of the best Spider-Man spin offs no pun intended to the screen since 2004 Sam Raimi's Spider-Man 2.
4/5****
BLURAY SPECIAL FEATURES.
EXTENDED POST CREDIT SCENE.
DELETED SCENES.
VENOM MODE-TRIVIA TRACK.
THE LETHAL PROTECTOR IN ACTION.
THE ANTI-HERO.
VENOM VISION.
DESIGNING VENOM.
SYMBIOTE SECRETS AND MORE.
EMINEM MUSIC VIDEO.
SPIDER-MAN INTO THE SPIDER VERSE SNEEK PEAK. 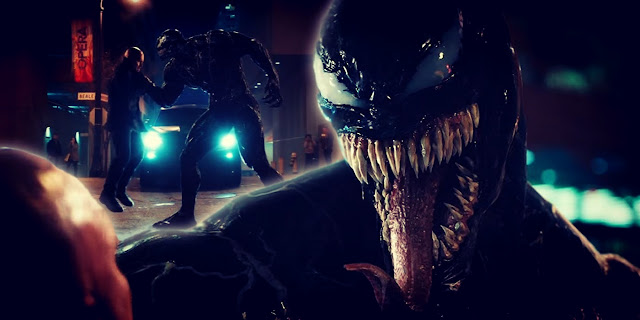