Holmes and Watson the film that just about everyone hated but was it really that bad?
Released during the usual Christmas dumping ground of either good or bad movies with this being the latter, a satire that is only slightly funny.
An American hating Saturday Night Live sketch stretched over 90 minutes, with the usual jokes about gun law in the US, and typically jokes about Trump, and the current political climate and complete mess in the UK with ' Brexit'.
Some jokes falling like a stone, and by the way if you see the trailer you will see all the best bits, although one use of the F bomb is well received and comic timing by John C Reily is brilliant, and in fairness the saving grace of this movie, with Ferrell becoming so annoying almost immediately.
The big question is, is it really that bad though, well in my opinion no not really, yes a lot of jokes fall flat and do not work, yes it is a sketch drawn out over a longer running time, it is not particularly offencive unless you live in America where the constant digs are relentless and become unfunny fairly early on. The thing that does work is the obvious chemistry between Ferrell and Reily, who clearly have a lot of admiration for each other, with this becoming the third collaboration I can understand why producers green lit this movie. Unfortunately with a dire script, comedy set ups that either don't work, or are just plain obvious is the reason this movie failed, and also in my opinion never should it have got a cinema release, I think it would have found its forte with a direct to home video release either on demand or DVD and BLURAY. Still it did get a theatrical release and will always suffer for it, yet I do believe that this will be a film that will gain cult status and will actually be liked years down the line, as the world politically is in such a mess the humour was just too politically charged for a generation that is easily offended.
2/5** 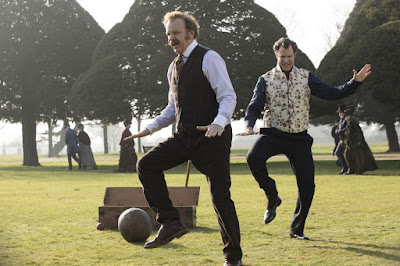