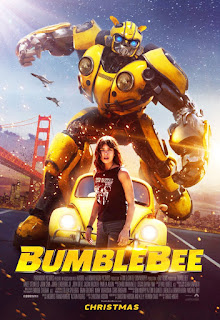 Take the best character from the shittiest of movies from Michael Bay, then have a retro blast with the thing that made the best teenage movies of the 80's, teenage angst and humour you get this, a film with the heart of Spielberg, and the humour of John Hughes movies, we ladies and gentlemen have Bumblebee.
I cannot believe I'm saying this but finally after 11 years, and two fucking awful Mark Wahlberg starring movies, we finally get a Transformers movie that not only is good, but exceptionally good.

A brilliant movie about friendship, forget it's a teenage girl and a 12 foot robot, this has more heart that it could have been directed by an 80's Spielberg, with a script by John Hughes, although it isn't it feels like it could belong to that decade of teen movies. This film isn't afraid to say yes it is aimed at teenage, and younger kids and that is not a bad thing. With nods to ET, and mentioned before John Hughes and Breakfast Club references, a brilliant 80's soundtrack, enough rock tee shirts worn by teenage Charlie (Haylee Steinfeld) to last the entire decade of the eighties, we have the usual anger and not fitting in what we had in most if not all 80's movies. We have probably the best retro type movie about the decade that I'll always love and cherish, with a giant yellow robot, and it's friendship with a teenage girl.

It's a film that I wanted to hate, but I ended up feeling a warn feeling in my being, a film that made me remember my love of 80's cinema, a film that I was grinning from ear to ear, whilst slightly leaking out of my eyes, a perfect family film, that is humorous, action packed and a film that Michael Bay would never ever have a concept of, a movie about human emotions and 💓.
A perfect film in every sense
4/5**** 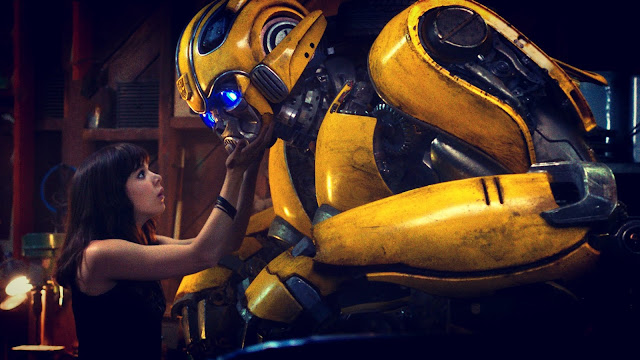