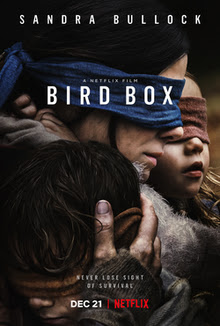 After all the who har and the constant barrage of Bird Box parody videos on Twitter and You tube I had to see this film, a film my mate at work said was "shit" so I had to make up my own mind about this.
Here is my opinion on it, it was actually very good, not knowing much of the story helped, and yes apart from the stupid people pretending to be blind videos I didn't do any research on this movie, to which I believe made a better viewing experience.
A film that Sandra Bullock who to her credit is a great actress, this being by far her best performance I've seen her in, the normal rom com queen and comedy movies, but this gal can actually act, and my goodness she is amazing in this.

Apart from firstly not knowing how to row a boat, and by the way at least a third of the movie is on the river, you can actually see her having no clue whatsoever to an accomplished rower, and this was deliberate by the director involved as he wanted to see her progression so all the river scenes were shot in chronological order.
The child actors were quite remarkable, even my daughter saying I bet they'll be traumatised after filming this very tense film, being blindfolded or thrown under a dark sheet, the way Sandra Bullock speaks  to them would be enough to terrify them. In fairness they'll be needing therapy no doubt in years to come, as this movie is bleak, you're watching it and hoping for a happy ending, and set back after set back, set piece after set piece the longer this film goes on the less as a viewer you have any hope for them, this bleakness is what makes the ending so rewarding and worthwhile, and by the way fucking genius.

This film is everything that The Happening needed to be, although comparisons have been made this films stands head and shoulders above it, the one genius this film brings is never seeing the beings that taunt the living to look at them, we sense them, they play tricks on the mind of the living to deceive the living to look, and then subequently die at their own hands by suicide, this is the reason this movie works so well. It draws on our natural feelings of death and our own demise, if you could see your own death would you look, or would you want to live in a world of blackness and no sensory output that is the dilemma of this very bleak apocalyptic film.
Yes by the way I can forgive the very big five year later plot hole that is not shown how the characters can move from one place to another without an explanation, apart from that this film is excellent, the acting, the tension, the dramatic river section and rapids is breath taking and relentless, the acting from the two young children, to every side character, this movie is borderline perfect, and probably the best apocalyptic film I have ever seen.
4/5**** 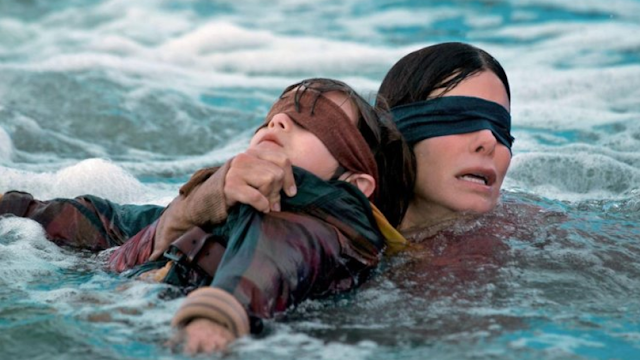