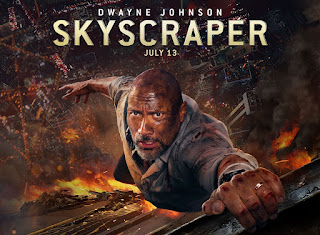 In all fairness I had little hope for this film that starred once again Dwayne Johnson, the most bankable and highest earner of 2018, with this Die Hard clone meets Backdraft meets Towering Inferno, about a high rise tower building being taken over by terrorists and setting fire to it to get the owner and CEO of this building from his penthouse apartment for some code he has on his phone, whilst the head of security has to rescue his own family from the same building as the fire was set on their level.
That in a nutshell is the entire story and movie, being a PG13, the film is no way violent enough the bad guys are the usual stereotypes foreign guys, with the muscular American hero to save the day.
As I said this film offers absolutely nothing new to whatever genre it wants to be, it has zero moments of any tension, terrible acting not from Dwayne, but from his co star Neve Campbell, who is so good in the Scream franchise, but in this offers nothing, just a pathetic mum who needs saving. I so wanted to like this movie, but it was so void of just about everything, shame as Dwayne Johnson still puts in a decent performance in a film that no ways deserves it.
If you want a decent film about a terrorist take over of a building one word, one film Die Hard, leave this PG13 KIDS film alone and watch Bruce Willis kick some serious ass instead. That's all I'm going to say about that.
Avoid, Avoid this travesty of film, although a great performance from Mr Johnson, Skyscraper is extremely below average.
2/5**