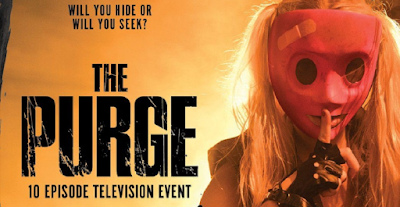 The Purge the TV series with a ten episode run straight from James DeMonico is finally on TV, with the first episode now being showed. Now is it any good, it is hard to say with most of the first 51 minutes run time introducing characters 90 minutes before the annual purge takes place. We see an ex marine looking for his sister who has joined a cult who want to offer their lives to the purge, we see a wealthy couple but decent wanting to raise money for a children's charity but can only do this by mixing with the top 1% and patrons of the NFF at a gathering, that doesn't seem to be as nice as it should be, and instantly feeling uncomfortable, and the third story ark of a business woman completely safe from the Purge whilst working, as her and her colleagues have signed a non purge contract to work, whilst they are safe whilst under armed guards. It is hard to say how this series will pan out, as the Purge does just start just before of the end of episode 1. It does look promising though, shame as it's about the purge that has already been established, when all talks was it was going to be the prequel to how the founding fathers got into power, alas it isn't, but still it does show as I said before promise, episode 2 I will review next week, but the strength of this episode I'll give it 3/5***