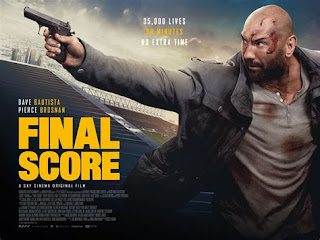 Released yesterday at UK cinemas also a Sky Movies exclusive premiere movie, this been there done that action fest that borrows between Jean Claude Van Damme's Sudden Death, mix it with Green Street, and a little borrowed bad Russians from Air Force One and we have this yawn fest.
The thing is I like Dave Bauista Drax from Guardians Of The Galaxy he is a great character, funny, warm and still an ass kicker, in this movie  Bauista has no presence at all, a go through the motions action star, that with his huge size just looks incredibly slow and clumsy. The acting as well is just dreadful, alongside the bad cockney accents, to an obvious movie made by Americans thinking what it may be like to be British, about one of our biggest traditions Football, or as the Yanks call it Soccer, and how fans, the whole tribal side of football fans, and the importance it is to them, and get it so wrong. Set at the former West Ham ground before they moved into The City Of London Stadium, or the former Olympic Stadium. We have the now baddest of bad guys those pesky Russians again meddling with our politics, and some how managing to get through very heavy security to take over the West Ham ground, rig it with explosives, blow it up at full time unless the British Government release a former Russian dictator currently in hiding with immunity in the Capital. The only thing stopping them is Bauista who happens to be there with is adopted niece, ex forces and will stop at nothing to protect her, and save 35000 fans from certain death from Russian terrorists. That my friends is the film in a nutshell, offering absolutely nothing new to the action genre, a by the numbers film that is so obvious it really is not worth the watch, certainly not a trip to the cinema, if you subscribe to Sky Movies package give it a go, otherwise give it a miss.
The scary thing is if Bauista is going to pull out of any Guardians movies, like he say he may do, if this is the best he can do, I do worry for his future as an actor, and he may unfortunately be a one character actor, only ever decent in one role, the role he may never do again and that is Drax.
A poor excuse and easily forgettable movie 1/5* 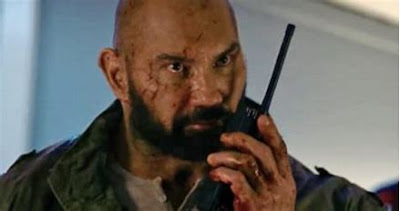