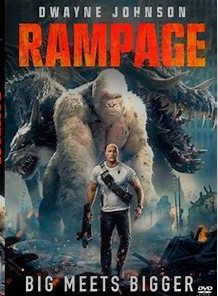 I did think long and hard about this whether to include on this blog and you know it deserves to be on here. It is a young dumb full of cum movie that we all can enjoy. Who would have thought a video game movie that actually works, when it was announced that a live action version of Midways Rampage from the late eighties was getting the Hollywood treatment most thought OMG, the memories of Super Mario Bros, it burns my eyes now.
Yet it was starring Dwayne Johnson, the highest paid, and most successful actor in recent years, fresh off sucess in Jumanji, Fate And The Furious, Baywatch, Central Intelligence and recently Die Hard for the kids generation Skycraper.
This unashamedly action flix with humour violence enough campness, and also a very rude gorilla is perfect, yes the plot is ridiculous some secret manufactured drug from a secret Goverment agency made in Space, falls to earth and infects an albino gorilla, a wolf and crocodile mutating them to monsterous sizes, which then go on to attack a city. Only Dwayne Johnson can stop them, as the gorilla is his friend, and he has raised it since it was a baby, and being his handler thinks the monsterous gorilla will listen to him, and he can reason with it before the Army destroys all three beings.
This movie is a great movie, it is the movie that Kong and Godzilla so wanted to be, maybe that is  what was missing, was the always reliable and likability of Dwayne Johnson, an actor proving amongst his enomous size is now classed as the every day hero that all can relate too.
Rampage is a supid movie, but is brilliant, everything works in this it is pure daft entertainment which afterall is what we all pay for when we go to see a movie.
4/5****