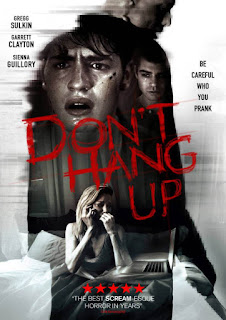 This movie is a surprising find, I had no intention of watching this, it stars two actors famous for stints on the Disney Channel, starring in Wizards Of Waverly Place, and Teen Beach Movie, I thought it was a typical horror/ psycho thriller, how wrong I was. It is a really good psycho thriller, with one great reveal later on which is equally genius, but also very disturbing, that puts the whole concept of this movie into perspective.
It tells the tale of three panksters who posts telephone conversations online for as many views as possible, thinking it is funny to prank someone on the telephone saying that they have incurable cancer, to telling people they are seriously in debt with credit cards, or saying to loney woman witha child in the house they are the police and have their house surrounded as a killer is already in the house, and to barricade yourselves in.
All this for the pleasure of their sick audience who find it hilarious. This is funny until they receive a phone call one night being told "don't hang up or there will be consequences" thinking they are being prank'ed themselves, to only find out this prankster is deadly serious as he has their parents, and girlfriend captured, beaten, and will kill them unless these friends turn on each other and kill one another, or face seeing their love ones killed live onscreen using social media, and smart tv's as a media source.
It is a horrible concept, but in fairness I feel no compassion for the two protagonists, as they are extremely unlikeable human pieces of scum, that actually deserve what is happening to them, as they realise there sick pranks actually has real life consequences, as seen later on in a sick reveal.
Being this film was made in 2016, is more relevant now than two years ago, especially with the scandal of early 2018 with Logan Paul pushing boundaries of taste to the limit showing a dead body of a suicide victim in Japan's haunted forest, and not realising how immorally wrong it is to do so, all for fucking views on his youtube channel.
This movie is relevant to the point showing not so much the horror revenge aspect of this movie, but showing pranks, unsettling posts on social media purely for views is morally wrong, not knowing the social and damaging, and dangerous consequences can happen because of their short sighted attempt at humour and fame can do.
This is a very clever take on the dangers of social media, and apart from Smiley the best movie made about the subject of the dangers of the miss use of social media, a brilliant film, and I really mean that.
3/5***