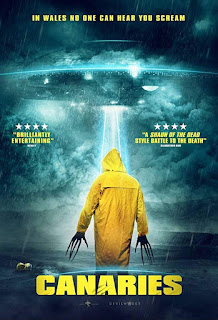 Welcome to another alien invasion film, but this time with a difference set in the rural valleys of Wales.
With this time humans fighting against time travelling aliens, that kidnap, clone human beings with their DNA then return them to earth wearing yellow rain coats with razor sharp talons perfect for killing.
Set on the eve before new year 2015, a bunch of friends reunite for a drunken meet up, with cocky radio DJ Steve Dennis ( Craig Russell) from London, trying to forget his Welsh roots now he is a trendy DJ, with most of his so called friends not liking him, or each other very much.
When a dead African male tribesman falls from the sky onto their holiday rental home at midnight although very drunk they realise something isn't quite right. They all then  have to fight for their lives against these yellow coated alien beings, that have decided to invade rural Wales. Starring well known faces of sitcoms from the likes of Coupling, Gavin And Stacy and Stella, this film really is a joy to watch, it is good to see cast members actually having a good time as this film shows. It is purely tongue in cheek humour, the aliens are a combination of zombies with blue faces, with Freddy Kruger style fingers in bright yellow rain coats, with blue hands that are clearly work gloves that I'm sure the DIY shop where I work sell, nether less this is still a fun movie, obviously the comparisons to Shawn Of The Dead are always going to be there, personally if you enjoyed Attack The Block or Worlds End you'll love this low budget British jem.
3/5***