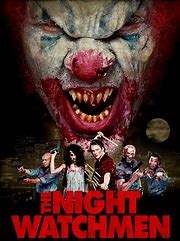 A decent little indie vampire flix that is really quite good, the story of the most underpayed members of society security guards, who after receiving a package meant for their business neighbours containing a vampire clown of all things, have to survive a night shift of the undead clowns and former turned vampire colleagues.
As said previously this film should be the run of the numbers comedy horror flix, but it has some great attributes and characters we care for, the teenage drop out, the token, but very funny black guy, the Hispanic who may be an ex cartel assassin, the girl every one fancies in the workplace who is a kick ass vampire killer, and the gruff too old for this shit leader.
We have a genuinely funny film that ticks all the boxes, clowns, tick, vampires, tick, the undead, tick, and plenty of blood and gore equals tick.
I preferred this movie so much more than Bloodsucking Bastards that pretended to offer so much more than it actually did.
So simply if you like low budget vampire movies, that happen to be clowns, and one of the best Afro American vampires with one of the best fro's ever, this movie is for you, a shamefully great movie, better than it deserved to be, that may have slipped under many a persons radar, if you get a chance please give it a go, you won't be disappointed.
3/5*** 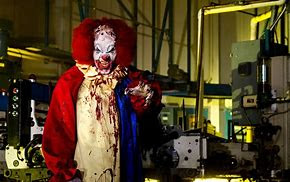