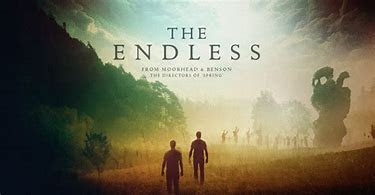 What can be said about The Endless apart from 'oh my god' I love micro budgeted films, I love slow burn movies that rewards its audience, movies that leaves you with more questions than answers, well The Endless is that movie.
Although marketed as a horror movie from its trailer, it isn't it is a very clever sci-fi thriller, from Moorhead and Benson, the Directors of last years very clever body horror movie Spring.
I would like to say what this movie is about, but saying too much will spoil the eventual movie and ending, what it is about is two brothers who were orphaned early and were brought up within the confides of this peaceful existence, to some and the outside world it was a cult that worshipped UFO and all things alien. The older brother believing the cult was planning a mass suicide decided to remove his younger brother and himself and escaped the cult.
Cut to ten years later they get a strange video cassette through the post to invite them back to the cult, to which the younger brother wants to go and persuades his older brother to go back for just 3 days, what they find there when they get back astounds them, and gives them more answers about their existence, and also the whole meaning of life and reality as we know it.
This movie is a slow movie, I'm not going to say that it isn't, it is, but the slow pace is deliberate and you are rewarded by a brilliant what the fuck ending and final third, the visuals and even special effects that were created by the filmmakers on their own computers rather than relying on expensive outside visual effects companies were a sight to behold, and what makes this movie even more special to the two talented filmmakers and writers.
This film is a labour of love for the two filmmakers, and you can see this love throughout this amazing film, the extensive making of, on the DVD and Bluray proves this.
With a great reversible cover from the aways reliable Arrow films who have distributed this great movie, and given it the same pride as the two talented film makers in Moorhead and Benson.
A brilliant movie, if you liked Coherence, Primer, and anything remotely Twilight Zone you'll love this movie as much as I did.
4/5****