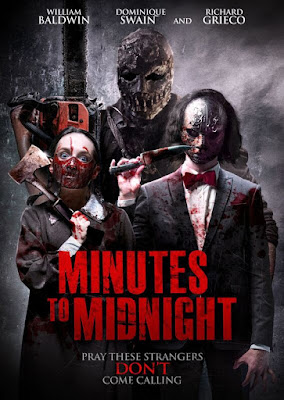 Minutes To Midnight on VOD From July 3rd.
I have to give plaudits to the creative poster department for creating this poster, that coincides with the release of Strangers Prey At Night, with the tagline " pray these strangers Don't come calling"
I'll admit I was intrigued when Uncork'd Entertainment sent me this screener copy, especially when it's staring some of the nineties biggest stars William Baldwin, Dominque Swain and Richard Grieco.
A slasher movie set around New Years Eve, although it looks like it was filmed around the middle of summer, with a cabin in the woods vibe going on, meets Devils Rejects, and a poor mans Strangers. Yes this film is crap, but strangely really, really enjoyable, I see these type of movies two three times a week, but this one was actually quite good.
It is half decently acted, has two scenes of graphic nudity that is always a bonus, every horror movie stereotype is in this movie, one don't have sex, two never go out to investigate a strange flashing light outside, three if your told the place is where some famous killings took place don't go there, four the final twist, and main bad guy is painfully obvious.
Apart from a few gripes that is unfortunately in every horror movie made these days, from high budget, to micro budget, this movie is really okay. It has some decent kills, a decent amount of blood, the usual young adults going into the woods at a remote cabin to be picked off one by one by a trilogy of killers we have seen before, but it is still watchable.
It is a bit naughty advertising William Baldwin and Richard Grieco in this as they are hardly in it, although Dominque Swain has aged really well, shame can be said about William Baldwin and his Dad bod, and Richard Grieco looking like years of partying In the early nineties excess has taken its toll on him, shit he was my man crush in the early nineties lol, when he was on 21 Jump Street.
Anyway this movie when it comes on VOD give it a go, it really is a decent watch, yes it is clichéd, yes the characters make bad decisions, you can spot the bad guy protagonist a Mile away, it's blatantly obvious, yet all gripes aside it is watchable. Give it a go with a couple of beers with some like minded drunken friends and you will like this movie, I know I did and I was sober.
3/5⭐️⭐️⭐️
⚫️ Plot details.
What happens when a night of fun turns into a night of horror.
A bunch of friends, a mysterious backpacker, at a remote lodge celebrating the New Year. As the clock ticks down they discover the end of this year may be the end of their lives when they are beseiged by a bunch of mask wearing maniacs. 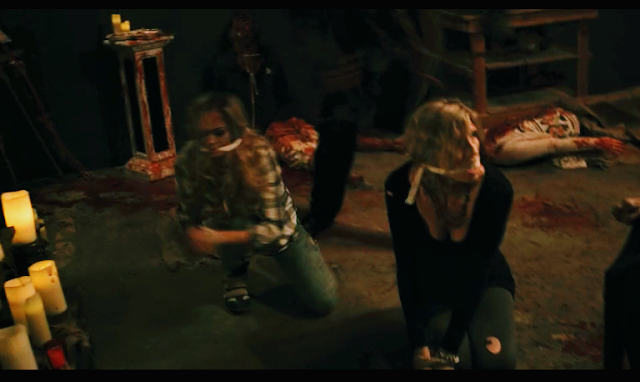