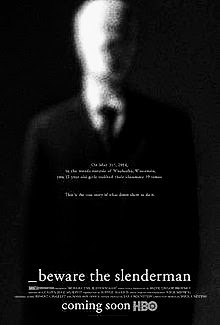 Having watched this excellent documentary last night thinking it was about the Internet folklore of The Slenderman, famous from the pages of Creepy Pasta, although this is the case the underlining story is of an attempted murder by two twelve year old girls obbsessed with the folklore.  Believing they were about to be servants of this being by taking a life, a sacrifice of their best friend after enticing her into some woods and stabbing her 19 times.
The whole case shocked the rural community, so much so, that the girls were tried as adults and expected a 56 year stretch in jail if found guilty. The other thing that scared the adults more in this case was the access to information that the Internet has, including mass amounts of YouTube content to the obvious Creepy Pasta site. We see the birth of the myth, like a Grimm fairy tale, started in 2009 from a photo shop experiment by a student, to the constant added information from other users of this site.
The folklore grew to massive proportions in 2013 when everybody had at least heard of this character, and like an expert said spread like a disease in the heads of impressionable young kids and vulnerable adults.
With this documentary was proving once again how dangerous the Internet is, and no matter how many barriers us as adults put on our children's viewing, they can still be vulnerable to sensitive content that can influence impressionable minds.  A cracking documentary about the dangers of the internet, and the creation of a mythical being, as the new bogey man that only children can see, that eventually almost led to the death of a twelve year old girl, by two other girls obsessed with this made up legend.
4/5**** 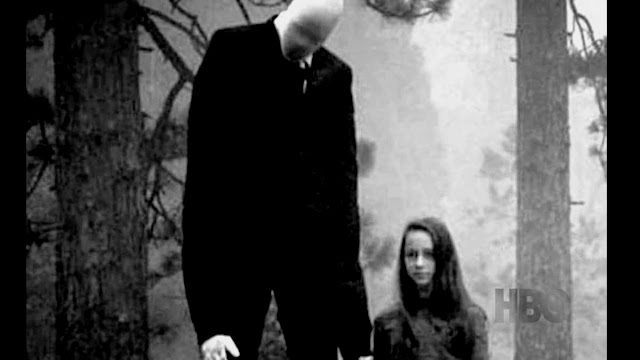