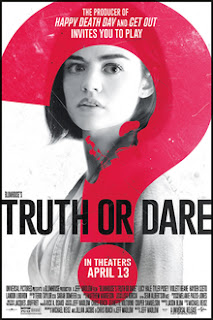 Yet another movie from the camp at Blumhouse, that so many have criticised so I finally got a chance to see it, and is it as bad as most say, well yes unfortunately.
Six friends go to Mexico on Spring Break and end up at a haunted church where they play a cursed game of Truth Or Dare.
With a mysterious stranger admitting he got them to play the game to pass the curse on, just like the movie It Follows.
The main girl Olivia on returning home sees Truth Or Dare written everywhere, to realise she still needs to play so do her friends or they have to suffer the consequences of the game.
Suddenly Olivia realises there is a pattern to the game, and selfishly passes it on via a Youtube video potentially cursing the whole world.
That is what I, and many others had a problem with, save yourself and selfishly infect everybody, because we are all curious about clicking on certain Youtube videos.
So in a nutshell this is the Millennial version of The Ring, but being seriously un-scary, with a lets just give people a demonic smile and that will fuck everyone up senseless, well it doesn't work. What would help too would be to make characters likable, in which none were in this dire movie, yet the acting is OK, with a typical too old cast pretending to be older teenagers, with the stereotypical use of other teenage anxiety's such as fear of coming out because your gay, the usual drunken getting off with someone else, the usual Jock stereotype of cause has to be included, as well as the complete bitch.
Yes this movie is so run of the mill horror, that minus a few deaths could've easily been a Disney kids movie on the Disney channel.
Blumhouse has finally fallen a little on this movie, with so many hits of late, Split, and Get Out seem a distant memory, hoping this movie is a blip, and maybe a lesson stop churning old hat teenage horror, and concentrate more on adult horror such as Split and Get Out, proving you don't need gorgeous actresses and fit six packs to sell a movie, just a great story, and a clever script with a good director involved, which Truth Or Dare clearly has none of the above.
1/5* 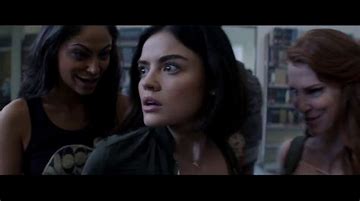