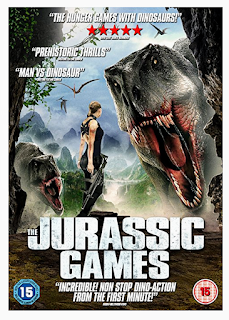 Many thanks for High Octane Pictures and Uncork'd for the screening copy, a film that is what the cover says, A take on The Hunger Games with Dinosaurs. Set in the future, where death row inmates are given a reprieve to star in the hit TV show The Jurassic Games, a game that is set in a virtual reality world, where if they die in the virtual world they die in real life as they die automatically by leathal injection. Only one winner can win, and the prize is a pardon and the chance to go free. We have 10 death row prisoners who enter the VR, and have to survive four stages, at every stage is danger as different dinosaurs are released to eat the inmates. The film is cheesier than Dairylea, and Chucky Cheese, it has dreadfully cheap CGI, as the dinosaurs are a bit shitty, looking like it was made by Stephen Spielberg's young kids, if he had them on a cheap app on an iPad. We have cliché characters, Redneck Brothers, a serial killer, a cabalistic man, the token black man, Korean, and Hispanic drug dealer, and a man who is innocent, and two girls who are not so innocent. The film obviously has been influenced by other future films such as The Running Man, Robocop, and Escape From New York, as most of the scenes are set in the studio, where we see the directors, producers, reasearchers, we have fake commercials just like in RoboCop.
This film is dreadful, but in a good way, it is the type of film you'd happily sit and watch on SyFy channel, if you like Sharknado, and other bad films made with complete tongue in cheek this is for you. It is worth seeing purely for the karate fight scene with velociraptor and a chain with a nod to any Bruce Lee fight scenes.
The film is terrible, it really is a little crap, but still enjoyable, if you like crappy films, with no budget and you want to be entertained this film is for you.
2/5** 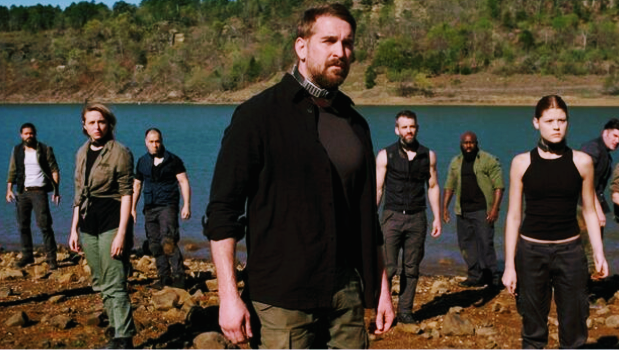