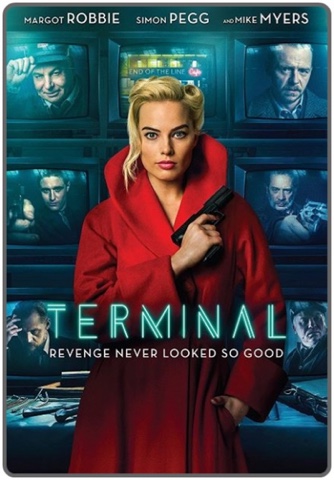 Terminal the film that is dividing critics, with a 22% Rotten Tomatoes score, "WTF" did they see a different film to me, what I saw was probably the best British film, and best twist since The Crying Game, and we have not one but two to bleeding deal with. With Margot Robbie who is not only gorgeous but fucking nails the English accent, I could hear her say " Naughty" in a British accent all night long. Yes this movie has a very cockney twang to it, and to any non British residents that means a London based accent with loads of " Fackin muppets" "you Fackin C**ts" you not what I mean if you live in the UK. It has a Lock Stock And Smoking Barrels feel about it, starring at least two actors who starred in that, that is Dexter Fletcher, and a blink and you miss it Nick Moran, it's as if this film could've be directed by Guy Ritchie when he still was good, without the crappy fast edits that Guy Ritchie was famous for, before turning into the shittest director ever. This film has class, the neon imagery, the noir feel, some brilliant acting from Simon Pegg, Dexter Fletcher, Max Irons and a surprise from Mike Myers who has dissapeared from our screens for so long, and is amazing in this, and nailing the British accent as well, but a lot don't know he is a fellow Brit being born in England before moving to Canada with his parents at an early age. The absolute star of this is Margot Robbie, who some are saying this film is a comedown from her performance in I Tonya, I disagree, she nails this movie, playing a femme fatale, who's very clever game of revenge, that turns the tables on all the men in this movie is outstanding. Some are comparing parts of this movie to Usual Suspects, well this movie has a far better twist, and a far better ending. It is hard to say much about this film without giving too much away, but the multiple story arks are brilliant. Do not listen to the critics, this film is very clever, and my favourite British film I have seen in over 20 years since Lock Stock. A brilliant debut film from Vaughn Stein that really needs to be seen, and although most may not get it, I guarantee it will be a cult classic in years to come. An outstanding movie it really is.
4/5⭐️⭐️⭐️⭐️