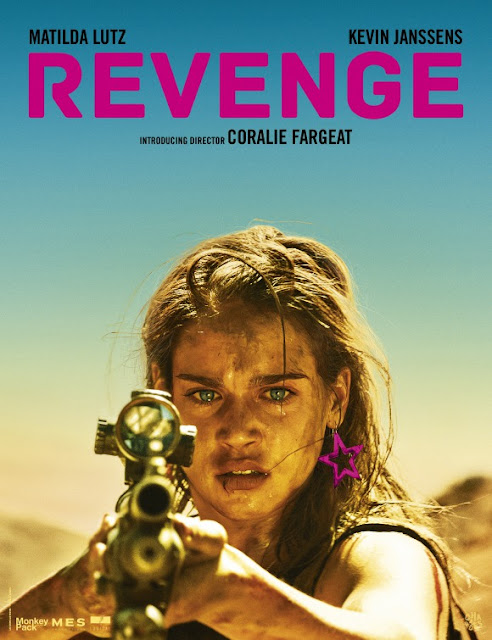 Revenge is a movie that is  equally horrible washed with gallons of blood, to some of the most impressive camera work seen on- screen a melancholy mix of colour, visuals that from first timer Coralie Fargeat
looks like it has been directed by someone more established.
We have a revenge film that for once doesn't rely on torture, from the survivor, we don't see baseball bats wrapped in barbed wire pushed up a man's backside, or a man with his eyelids forced open with fish hooks. What we do have is a story although graphic, and sickening, using only guns, and knives.
It is a simple premise a rich man and his gorgeous mistress go to the dessert for a weekend away, in his posh man cave retreat, when two of his buddies actually turn up for the hunting trip he used as an alibi to his wife. With Jen who is hot and she knows it, a man's fantasy, perfect in every way, but still treated like a piece of meat from the men in this picture. Things happen, I'm not going to disclose, but she eventually ends up being pushed off a cliff , just so the selfish men can carry on the lifestyle they're accustomed too. She survives, and whilst the men realise this try to hunt her, whilst she decides to hunt them back. We have a woman that is seen as just a body in the opening of this movie, to a woman that her body and her fitness is the reason she is still alive. She carries the scars of mistreatment, but we no longer see her as a body, but a strong woman who empowers, and is easy her men's equal. With an outstanding performance from Matilda Ingred Lutz, that is nothing short of amazing. Everything about this movie is class, the visuals, the astonishing use of blood, the drug infused scene is  astonishing. We have a woman seen as just a body in the opening scenes, who's vulnerability is seen in one upsetting scene, to the main protagonist, seen in the same vulnerability later on. If you want to see a film with the perfect French flair, and stomach the blood that is literally all over this picture, with some great acting, and some great cinematography this film is it.
4/5**** 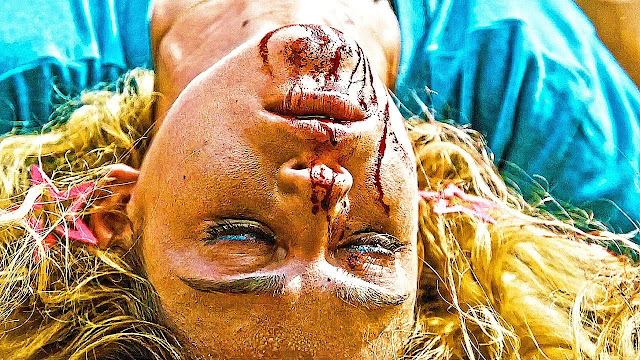