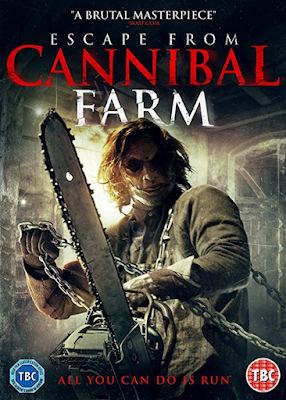 Escape From Cannibal Farm I had the unfortunate chance to see on a screening copy, I have to say thanks to High Octane Pictures for sending it to me,  I wished I'd hadn't invested my time in it though.
A British Texas Chainsaw wannabe, that with Leatherface with all its flaws and being dreadful, is still a better movie than this one.
With the trailer making this film look like a gore fest, showing all the gore in this film, and what to expect, with a script, and acting that is hilarious. It was so bad I was laughing so much, that is how bad it really is. Honestly I've seen a lot of bad movies in my time, but this is honestly the worst film I have ever, ever seen.
With a clever Chainsaw clad face on the cover, which is completely misleading as the chainsaw is not used once in the movie. Talking of chainsaws please lend me one so I could destroy this god awful movie, or even to cut out the memory of this turd from my brain.
1/5*