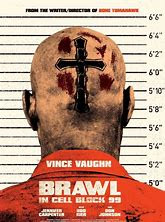 From the writer and director of Bone Tomahawk, S. Craig Zahler comes Brawl In Cell Block 99, well more than a brawl more like a massacre, and if you enjoyed the gore in Bone Tomahawk you will absolutely love this.
Starring in probably his best role ever, and one that will always be talked about on Vince Vaughn's CV.
Yes the comedic talents of Vince have been forgotten about, we have no improve like he is famous for, no team ups with Owen Wilson, we have one of the grittiest, dirtiest in your face violence, with some of the most believable fights scenes put to celluloid, these fights seem realistic, not staged choreographed within an inch of their lives, but brutal looking fights. Throughout all this though is Bradley Thomas (Vaughn) A decent man with decent values, who just so happens to make the wrong choices, losing his job early on, the ex boxer becomes a low level drug runner, when a sting operation one night sees him arrested, and sentenced, to a low level low security jail. He gets a visit one day by an employee of his boss saying he owns them money for dumping the stash of drugs, and will terminate his wife's unborn child in her womb, if he doesn't kill another criminal in a high security prison.
If he does this his debt will be payed and his wife will be unhurt. So Bradley is transferred to this other prison after attacking the wardens in his previous prison.
I'm not going to tell you any more as the final third is brutal, this isn't no PG13 film, the violence is relentless, which is so different to the first third which is slow in melodrama. Yet it is this the reason this film works so well, we get to see Bradley as a decent person early on, we see his choices that are the right ones, but he is still punished for them. We want to cheer him on as he fights his way out of all this, for one reason and one reason alone for the love of his wife Lauren (Jennifer Carpenter)
I cannot state how good Vince Vaughn is in this, a hulking powerhouse of a man that uses all of his 6 feet 5 frame to the max, and if you want to see one of the best decapitations ever to grace our    screens this movie shows it.
A brutal movie that is heart racing, and will be stuck in your brains for days, it isn't all about the violence it is about one man and his morals and decency,  using the skills that he learnt, and only he knows how to use them  to do the right thing for his wife and unborn child.
An outstanding film 4/5**** 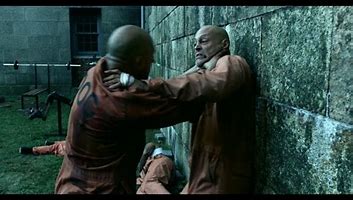