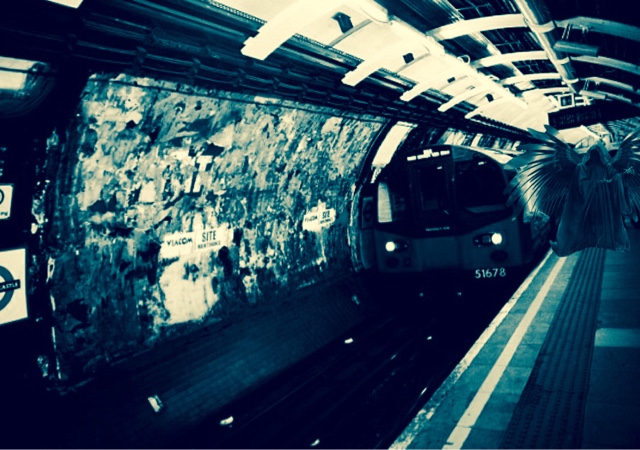 Copyright of this story belongs to Robert Perks.

"Oh fuck, fuckety  fuck" why do we all think that when the alarm goes off, that same daily routine of getting up at stupid o'clock, going to fucking work that you hate, but hey ho you need to work for that one thing you know money, that helps you live.
Rushing to catch that fucking train, you know will be overcrowded, full of the same daily faces, that have lost the ability to have any social interaction, "oh yeah I forgot I live in London" a regular feature here unfortunately.
Only today was different, the train pulled into the station late as always, already seriously overcrowded with the usual types, the city folk dressed in their finest shiny suits, students with their backpacks, with earphones plugged in, noticing that all men these days even though incredibly young have massive amounts of facial hair.
Massive bushy beards that ages them, with tattoo sleeves. Shit I'm only in my thirties yet I've turned into my dad, 'bloody kids eh....' But secretly thinking I'm older and my youth is well beyond me.

The train pulled out of the station, ready for the 20 minutes of hell being pinned in like sardines, you could hear the rustling of newspapers, the occasional sneeze or sniff, the squeak your rubber Soled shoes sometimes make on the floor, apart from that and the sound of the train, everyone is deathly quiet, the one thing that has always surprised me about London, being from Wigan, Lancashire is how no one speaks in London.
The train was about 8 minutes from destination, just about to head into the tunnel, and although the carriage lights are on, it is always a weird feeling as the train goes into what seems like instant darkness, now everyone will deny this, but everyone has this instant feel of anxiety, the tiny flickering of lights from the tunnel walls, the way the sound of the train seems so different, and the strange echo you get, although the carriage is quiet, this makes the carriage even more quieter.

Only today the train came to an unexpectedly sudden jolt, not enough to throw people into each other, but still enough to make strangers drop their papers, mobile phones, which was a strange thing, as the only light seemed to be flickering off them, was that strange white, blue glow you get, the carriage had turned into complete blackness, for the first time I heard talking, muffled screams, I felt movement, a panic enveloped the carriage.
Sensing everyone else reaching into pockets, and backpacks, handbags for their phones, in the vain attempt of bringing any light to the situation, suddenly the emergency lighting came on, to reveal the strangest thing, the carriage suddenly wasn't full, people who were standing just wasn't there , newspapers where commuters were, left by the seat in the same open position.
A woman screams ' it's the rapture' yes always some religious nut that screams that, I remember working with another colleague who left my previous place of work, and always went on about the bloody rapture. Yet I've seen every film about that bloody subject yet this seemed entirely different. Muffled sounds could be heard but was completely inaudible, strange flashes of lights could be seen, but never actually improved the light in the carriage, they seemed distant, but so near.
Suddenly a face from nowhere from outside the carriage pressed against the window, with the look of terror I have never seen before, she was screaming for apparent help yet no sounds were audible from her mouth, suddenly something moved in the darkness around her, the darkness enveloped her, and she was gone.

The panic from the other passengers, and even myself was immense now, "what the fuck was going on?" "Is this the fucking end of days?"
A woman was hysterical screaming " I need to get home to my babies" not knowing if they were her children or pets. Another noise could be heard outside the carriage, a distant sound of rustling, like wings flapping, a man who was crying, looks up in complete terror, then is surrounded by the same darkness we all witnessed, suddenly he was gone, then it happened again and again, person after person disappeared into this darkness that suddenly engulfed every person on the train.
Yet it was at this bizarre time a calming atmosphere filled the air, suddenly people were not terrified, but instantly at peace. Probably the same atmosphere of a crashing plane, when everyone suddenly accepted their fates. A woman on the floor, suddenly appeared as if from nowhere, covered in blood, but silently gasping for air, a man was then on top of her attending to her wounds, wearing what seemed like a uniform, the flashing lights and noises could clearly be heard, " we've got a live one here, thank fuck"
Suddenly the darkness enveloped me, but all seemed fine, I didn't feel scared, just a peaceful feeling of being taken away, looking at the carriage my last sight was of a carriage on its side, with the lights of emergency workers pulling out one person, the woman. Then I saw the light.