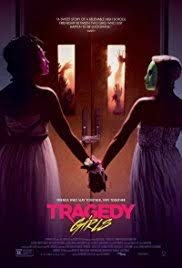 Tragedy Girls or as I saw it Heathers for the kids, is actually a delicious dark satire on modern life, with the I want to be famous for actually doing nothing, by being an online sensation, using Twitter and You tube type of movie.
With other influences from Scream, and even Mean Girls, with a modern take using social media as an output for two girls who are desperately wanting to be the next online sensation, and using current events happening in their own town, with mysterious deaths, and even a possible serial killer on the loose.
With the girls blog The Tragedy Girls, who are desperate to scare everyone senseless with their theories, with the naivety of the townsfolk, and believing all the deaths are accidents, the girls set out to murder themselves, and act on their dark urges to kill , just to prove the townsfolk they are right, about a serial killer on the loose, including actually catching him, and wanting tips how to kill efficiently. With some glorious kills, plenty of blood, gore, decapitations, throat slits, body dismemberment, at least we don't have a PG13  kids movie, but a R rated movie, that isn't afraid to upset, and shock the audience. With an ending that does that a plenty, with one of the most disturbing endings ever. This film is a good film, about that modern trend of wanting to be liked, but the importance of views and likes on social media, being the number one priority, with nods to other films such as Carrie, even the Purge, with it being one of the darkest comedies since Scream, and one of the best films about friendship since Heathers, it really is a great watchable film. With two leads just breaking out, but you know are going to be massive in Brianna Hildebrand as Sadie, and Alexandra Ship as McKayla, we have two of the most gorgeous and stunning young ladies, who are equally sweet, yet completely dangerous, who among everything they go through, and all the blood shed, is that friendship really is closer than blood, and we do see a lot of it.
4/5**** 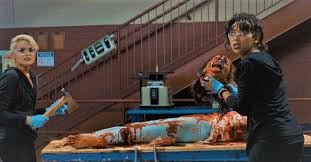