With The Purge finishing in 2016, with the dystopian future ending with a New President, the franchise was struggling to go anywhere else.
Well no, James Demonaco the writer and director of the original first one is back on writing and producing duties only this time with director Gerald Mcmurray on board to direct.
With The New Founding Fathers desperately wanting to bring crime down to just 1% , a trial is suggested to make crime legal for one night only, in which all crime including murder is tolerated, with a trial night happening just across a few states it soon becomes apparent more Americans want to take part in this barbaric night of mayhem, thus starting the annual Purge. This prequel film will get a cinema release on the 4th July, and once again produced by Blumhouse productions. 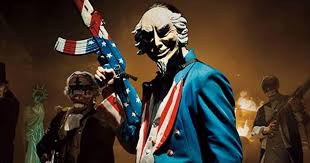