on February 28, 2018
Let the game begin. After a series of murders bearing the markings of the Jigsaw killer, law enforcement find themselves with the realisation, has John Kramer who is presumed dead over a decade ago back from the dead, or is there a copy cat killer following his previous work. With the lives of 5 people, all going to experience what life is, and how precious it is, by playing a very gruesome game to cleanse their sins, can the cops reach them in time.
I'm being totally honest I lost faith in this franchise years ago, I didn't even bother watching 4,5,6 and seven properly, just fast fowarded to the gruesome death scenes, which in fairness what this franchise had become famous for.
A tourture porn movie franchise insistence of more blood and gore on-screen instead of a decent storyline like in the first few movies.

The strange thing is Jigsaw 2017 has gone back to its roots, cleverly referencing the first movie, and like the first movie, a great script, less reliant on excessive gore, and when used is still shocking, but still not excessively brutal, for brutality sake. Which bizarrely is why the Saw fanbase has felt let down as it wasn't an excuse for bloodshed, but for once a very clever tight script, like Saw 2004, with a very clever twist, a great ending like the first movie, that unfortunately will now encourage  further sequels.
Apart from that I really enjoyed this movie, and for once producers did the right thing by having a 7 year break from the franchise, to wet people's appetites once more, finally working on a great script, and great direction by the Spierig Bros. Who directed the fantastic Predestination, one of the cleverest sci fi movies of the last decade.
A great horror movie, not as bloody or as tourture porn like the other sequels, but still the best movie since Saw 2, before the franchise turned crap.
3/5***
Special Features include.
*Audio Commentary with producers Mark Burg, Oren Koules, and Peter Block.
* I speak for the dead: The legacy of Saw.
* The choice is yours: Explaining The Props. 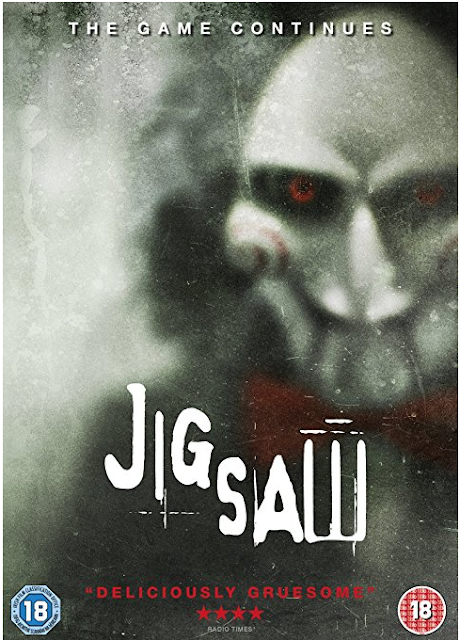