News and reviews for January 2018. 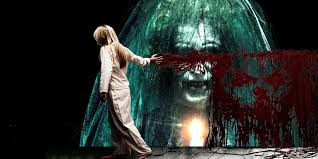 Looks like Blumhouse productions isn't happy scaring us with one franchise, the incredibly popular Insidious now on Chapter 4,at cinemas and is unfortunately being beaten by Jumanji Welcome To The Jungle, and sadly will not reach the horror heights of  IT at the box office, but what is in the works or a brain storming from  Jason Blum that it may crossover into the Sinister universe.
A film that did remarkably well on its first film starring Ethan Hawk, but failed miserably on its second outing, a film that may be saved by including it into the Insidious universe.

The strangest news in the last week is that the God Particle which is the third story in the Cloverfield universe which is set for release finally in April may not get a theatrical release after all with rumours that it may be sold to Netflix, although a Paramount release and made by J J Abrams production company Bad Robot. Rumours are that studio excecutives are getting cold feet about the film, and is unsure about whether it is a good movie, with J J Abrams apparantly coming in for re-shoots, but then being tied up with production for Star Wars 9.
With it being attached now to Netflix is a devious way of hiding a bad movie. 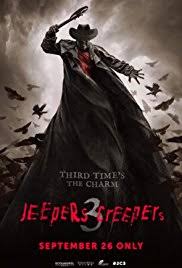 Although I said on this blog I wasn't going to review this film from Victor Salva, so in theory I'm not reviewing it entirely I thought I should put a mention on my Blog as it is a release for January. The film although the third instalment, is actually set straight after the events of the first film, and the time line strangely sandwiched between the events of the first film and the original  sequel.
In theory the film needn't have been made, with the controversial news about the director that wasn't needed, about the jailed, and former child molester that was Victor Salva in the eighties. Secondly the film is just not good, with crap effects, dreadful acting, hardly no gore, and is simply the worst film I have seen this year.