Is Horror the king of Hollywood once more. Proving for the second year in a row the most popular, and profitable genre. 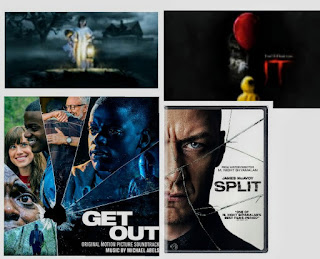 With 2017 almost over, we have had another disappointing year for movies and blockbusters, it comes to something that studios are hoping on a return from two crappy sequels to save Hollywood and that is Daddy's Home 2,  and Bad Mum's Christmas.
With Blade Runner 2049 being a total flop, only making $80,000,000 from its original budget of over $150,000,000 with marketing costs, it looks to be the least profitable film, and this year's biggest loser.
When in comparison four horror movies in particular have come out most favourably, firstly Split, which turns into a very clever sequel for Unbreakable, which inevitably has been turned into a trilogy with Bruce Willis, Samuel L. Jackson and James McAvoy in the film Glass currently filming directed by M Night Shymalan.
Another surprise was Jordan Peele's debut Get Out, a modern day body snatchers story, told with a social edge about racism in liberal America.
Amongst these were a sequel, but proving horror when done right can make extremely great sequels with the excellent Annabelle Creation, that ties into the Conjuring universe.
Finally October gave us two great films, firstly on VOD and DVD was Curse Of Chucky, and then 'IT' was released, the most anticipated film of the year, and for once did not disappoint, and is actually the most profitable film of the year, but also being the most popular, and profitable horror film of all time.
I'm glad I love horror, yes we have a lot of stinkers, but every now and then we have a few that actually blows us away, and this year is no exception for the best genre ever and that is horror.