Does the Stephen King books and films actually have its own Universe, like The Conjuring, Marvel and D.C.

on November 03, 2017
A fan theory came out this week linking IT to The Shining with the being 'IT' or Pennywise The Dancing Clown being some unknown creature from an other dimension that can only be seen and beaten by kids with a special gift.
What special gift? Well the gift of Shining, what Danny possessed in the film the Shining, seeing the ghosts in the Hotel, but was it really ghosts but Pennywise terrifying Danny. It is a hard one to believe, but judging by the Losers Club in IT do they contain the gift of Shining too, as Pennywise could not scare them, and they were able to defeat him,  that normal children could not. All the children have one thing in common, they are abused, or damaged in some way, they are messed up kids, like Danny in The Shining. Does this give them the ability to see the evil, but also not to be afraid by  beating Pennywise.
It is a long shot, and people are desperate to link things, but the fact Stephen King has already linked a lot of his books in The Dark Tower series, do we now have our own Stephen king Multiverse, that will ultimately link all his stories. 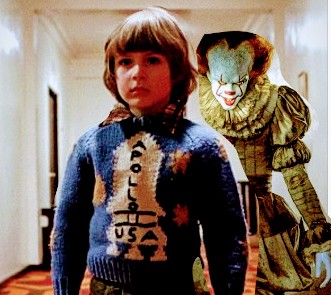