The 13TH Friday, available on VOD from October 10. Directed by Justin Price. Distribution by Uncork'd Entertainment. Film not yet rated. 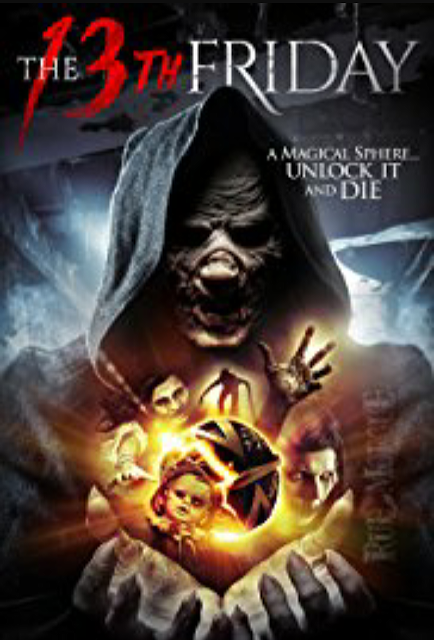 The 13th Friday review.
Many thanks to the guys at Uncork'd entertainment for sending me the screener link, unfortunately it is going to be hard to say anything positive about this movie.
From the moment I saw the poster I thought "Hellraiser clone" and I was almost right, instead of a cube, that drags you to hell , you have a spherical ball instead. That once opened produces the most terrible evil, with the only way to stop the evil is 13 sacrifices.
At least that is what I gathered, as either the film I watched was edited so poorly, that it made no common sense,  all my head wasn't in the right place, as I didn't get it. With every movie cliche added to the mix, the floating possessed woman, flies coming out of mouths, a creepy demon like woman, strange demonic cave dwelling creatures, we have them all, it's like playing bullshit bingo, only not using words, but horror scenes to cross off, " yep that's in it, oh and that one too"
I like to see the good in most films, this film I really saw no point to it. Badly directed, shockingly bad acting, badly edited film, that any film student making a test run could have made better.
Don't bother, even if the poster persuaded You, watch something else instead, or watch the real Hellraiser, as this isn't even the poor cousin, it's more like the adopted child, that has gone back to the orphanage too many times, and is extremely damaged.
Plot summary.
A house in deep dark Texas is cursed by an enraged spirit that died on Friday the 13th. And now a group of thrill seeking friends unknowingly unleash its wrath and damn their souls, by opening a spherical ball of devilish delights.
Starring,Lisa May, Khu, Melissa L. Vega, and Victoria Valdez star in a Justin Price (Alien : Reign of Man.