To be honest this was a strange one and yet I still thoroughly enjoyed it. Live-Evil happens on one Halloween night in a small American town. After an arrest at a large house with many dead bodies, an Evil presence appears that is willing to be arrested by tough as nails Cop "Hancock".

On arrival to the Police station the Evil presence, has different effects on who ever sees it. With it bringing out your deepest fears, to Pete the Hardened Sheriff sees his long dead Dad, who abused him,to another Deputy's seeing the person who hit and disabled his sister in a drunken hit and run.

This film is very art-house but still very clever,with a slight nod to Mr. Quentin Tarantino, as it is filmed in chapters with each chapter introducing a new character, with the Evil eventually taking over all the townsfolk who are weak willed except Hancock who seems to be unaffected by the whole Evil happening to this small town.

With other influences from John Carpenter, the final third did remind me of his filming style,with it reminding me a little of They Live mixed with The Fog. With a great cameo from the Horror king himself Mr. Tony Todd (Candyman).

I'm being honest. I did lose some of the plot in the final third, but I kind of figured it was about a battle of wills between God and the Devil, with this poor town caught in the middle. The Devil wants to send some items back to Hell using a priest played brilliantly by Tony Todd, to perform an Exorcism.

The effects for a low-cost budget film is surprisingly good, especially the Walking Dead with the glowing green eyes is really effective. The acting is surprisingly decent too, with the two leads suburb with Vladimir Kulich as the hardened Sheriff Pete. The best role is played by Charlene Amoia who plays no nonsense Hancock who is hard as nails but equally attractive too.

A strange film yes, but I imagine with the right promotion and release, it should be a popular cult film in the waiting. I enjoyed it. I really did. Yes it is strange, a little art house, but has genuine humour in places.
With it currently being shown on Amazon Prime ready for the Halloween holiday weekend, maybe it is a chance to see this quirky film from 2 years ago another chance.
3/5*** 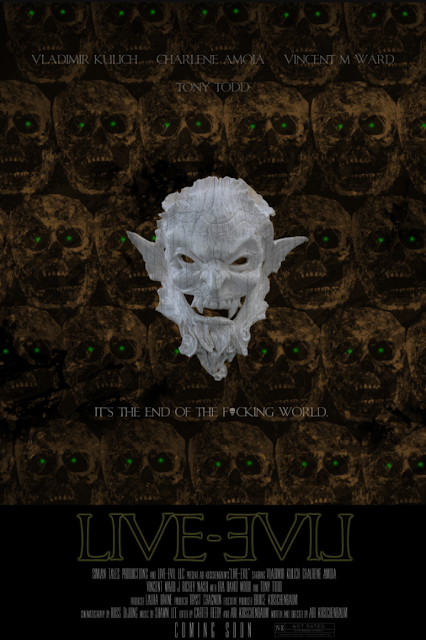