Tree is about to have a very bad day, again, and again and again.
College Grad Tree, a self centred bitch, who you take an instant dislike to, who is foul to everyone.
Treats everyone like dirt, then wonders why someone would want her dead. With a groundhog Day loop thing going on every time she is murdered she has to live through the same Monday the 18th, until she can find out her wants her dead, solve her own murder, and maybe become a better person in the mean time.
The thing is I really wanted to hate this movie, but I couldn't, because of the performance from Jessica Rothe as Tree, in her first scream queen role, starring previously in La La Land, and Netflix's Parallels.
She is so likeable and believable in the role, although playing the bitch perfectly, she is deep down a damaged soul, still mourning the death of her mother, and her grief is her anger towards fellow People.
With some inventive kills, and no matter what Tree does, the day always ends in her death, with her body eventually taking the brunt of all her deaths, and her waking weaker after every death from the baby faced killer.
My only real gripe is and this is a big one, it is completely devoid of any blood or gore, a typical PG13 rated film, that spoils so many horror films of late. I'm hoping the Likes of IT, the highest grossing Horror film of all time, being a Restricted rating,  proving to producers... so please take note,  that older audiences are appreciating horror, it is not just for you millennials you know, horror is for adults, we want blood, we want gore, we don't want a censored kiddies movie.
So for that I can only give the movie 2/5**
When it could have easily been a four out of five movie. 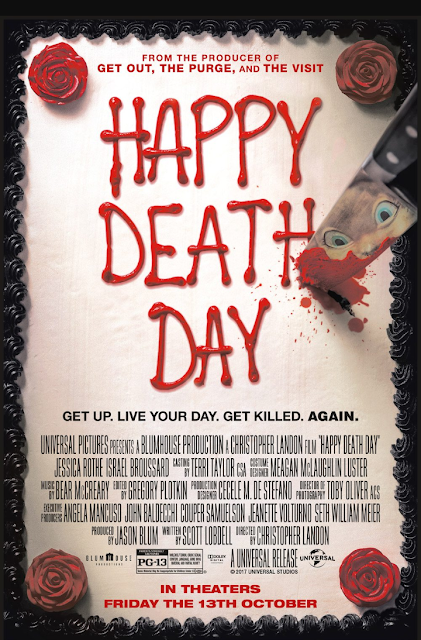