Cult Of Chucky, is it any good, well after the last one Curse Of Chucky, which I was impressed with, and with the online build up to Cult Of Chucky I was looking forward to it. I will admit I did give up on this franchise years ago, after seeing Child's Play 3, which was poor, then Bride Of Chucky, when it was going in the wrong direction, and almost becoming a parody of itself. Thank god the creator Don Mancini came back and saved the franchise in 2013, Curse Of Chucky was nothing  short of outstanding, to tie up this movie into the first movie, was class, and genius writing, Fiona Dourif as Nica was enlightening, the one loose end Charles Lee Ray needed to untie. Then after a four year wait Cult comes out, on VOD and straight to DVD, the film carries on from the last, and is a direct sequel, Nica is in a secure unit, believing now that she killed her family, and not Chucky. When the therapist brings in a Good Guy Doll to prove to Nica that it is not evil and not alive, and all her fears and memories are in fact part of her psychosis, the problem is Chucky has somehow managed to split his soul into many Good Guy Dolls, so the one Andy is keeping locked in a safe isn't the only one now.

So the institution is now filled with multiple Chucky's after Jill Valentine, (Jennifer Tilly) brings in another doll to give to Nica, the one belonging to her niece from the previous film, and to tell her Alice is now dead, and she wanted her to have her doll. With multiple Chucky's running around the institution at night we are gauranteed a night of blood and mayhem, with once again some inventive kills.

This movie is a hybrid between Curse Of Chucky and Bride Of Chucky, it isn't as dark as the previous movie, and the humour is certainly back, to which I didn't know if I liked this movie that much. Brad Dourif is on form as the voice of Chucky, the three different incantation's of Chucky are clever easily telling which one apart, I just didn't enjoy this as much as Curse, yes Fiona Dourif was excellent once more, so was the rest of the cast, but it was a little silly for me on my first impression, and that is how I'm reviewing this movie, no doubt I will enjoy it on multiple viewings, but judging by my first view of this film, I didn't like it half as much as I expected  to. It is still a solid movie, well made, it was just a bit silly for my liking. 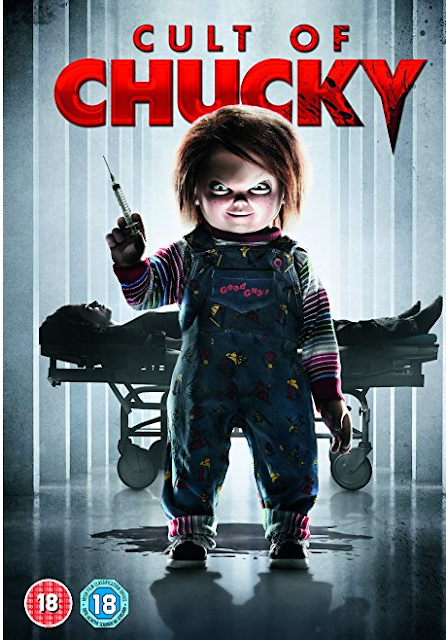