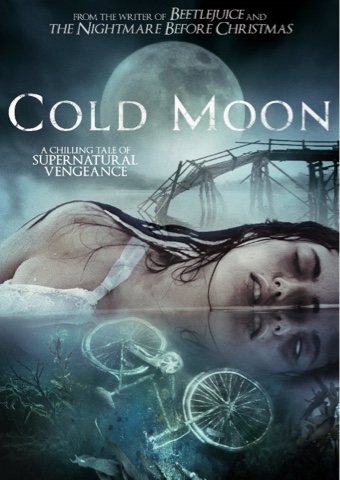 From Curmudgeon Films, and Highland Film Group, in association with All ABoard Productions, Cold Moon 2016. Directed by Griff Furst, distribution by Uncork'd Entertainment.

Cold Moon a delicious tale of greed, murder, vengeance with a supernatural twist, with this film so reminding me of a segment in Creepshow 1982 "Something To Tide You Over" about a vengeful couple who return from the dead to taunt the murderous villan until he eventually goes insane.
With this film based on the novel from 1989 Cold Moon Over Babylon by Michael McDowell  The writer of Beetlejuice and A Nightmare Before Christmas, with this movie actually reminding me a lot of Beetljuice especially the small town setting, the wooden bridge that is featured frequently, the watery grave setting, we even have a serpent with a human head in one scene, that was also used in Beetlejuice, in a clever practical effect.

A story of a murder in a small town setting in Babylon, Florida, sixteen-year-old Margaret Larkin ( Sara Kathryn Bellamy) part of the Larkin family, who own a farm that harvest Blueberries, suddenly going missing one day on a casual bike ride, to be found dead, tied to her bike, and drowned in the local lake near the Larkin residence.
With suspicion to who the murderer is, with a local school teacher being framed for the crime, because of his extra out of school activities with the young girl.
We have a dark tale of greed, and murderous violence, all over a patch of land that is owned by the Larkin family, that is worth millions in real estate revenue.

Although the killer is identified early on, I'm not going to disclose who it is, and the motives why, but their actions does not go unpunished as the vengeful spirit of Margaret Larkin constantly haunting the perpetrator.
With a great ending for once, that is deliciously dark, violent, and proving that bad deeds will not go unpunished.
Although this is not the most original movie I have seen, I really did enjoy this, with one scene in particular mid way through completely shocking me, and leaving me speechless. The ghostly spirit was handled so well, with no stupid jump scare scenes, although always creepy we have no forced scares, and stupid screams you normally get with these type of movies, for example the awful Dark Signal recently.
With a solid cast that includes the always reliable Frank Whaley Cristopher Lloyd, Josh Stewart, Candy Clarke, Robbie Kay, Chester Rushing, Laura Cayouette.
3/5⭐️⭐️⭐️