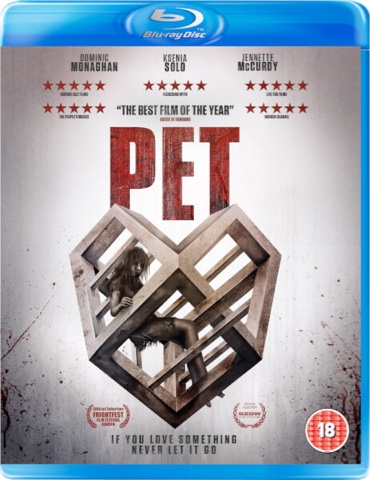 Pet Directed by Carlos Torrens, written by Jeremy Slater.
Starring Dominic Monaghan, Ksenia Solo, Jennette McCurdy, Nathan Parsons.
A film that just tries too hard to get as many twists and turns fitted into just one film, it is a shame as one story ark could've worked, but with three major plot twists is two too many.
Although solidly acted by Lord Of the Rings and Lost star Dominic Monaghan, Ksenia Solo (Lost Girl) and Jennette McCurdy ( i Carley, Sam And Cat) trying her best to shake off her teenage Nickelodeon role, and surprisingly the best thing in this movie.
This film is a tale of unrequited  love, with Seth (Monaghan) being love struck with a former High School pupil who in a chance encounter he meets  Holly ( Solo) on a bus, he tries at first a conversation with her to be blanked out.
With several other advances he is rejected by the quite cold Holly, who seems to have the perfect life online with her Facebook and Instagram photos, but actually her profiles are telling a lie as her life is not as fantastic as it seems, working as a waitress, but wanting to be a writer, lonely after dumping her boyfriend for cheating on her, with her only support is her room mate Claire (McCurdy).
When a final rejection by Holly to Seth, he finds her notebook, she leaves behind, the one she is always jotting ideas in, which starts him on this obsession with her, by kidnapping her then keeping her in a cage, in the hidden basement of his work place, a local animal shelter for abandoned dogs.
With far to many twists later on, this is more than a film about a love struck man going way to far to get the girl he loves, with twists that would spoil the film for you, so the reason I'm not going to disclose them, the one I didn't see coming, but with a final reveal at the end is one twist too many, the film is trying in the end to be just too shocking, with scenes of violence, and psychological torture, that is not pleasant to watch, with other films made such as The Cage, and also scenes in the TV series The O.A reminded me of this film, with the final two being so much better.
It is well acted, directed with confidence by Carlos Torrens ( Apartment 143)  But is spoilt by far too many twists by writer Jeremy  Slater, that is trying just a little too hard to shock the audience with a film script, by putting in far more plot twists than is needed, although making the film different from others, it is that which is also it's downfall.
2/5⭐️⭐️