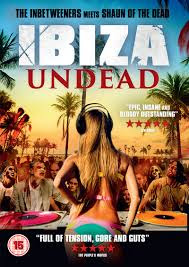 As the title says The Inbetweeners meet Shawn Of The Dead, if only that was half true I would have settled for a film that was half good, instead we got this turd of a movie.
A film that is a disgrace to include Shawn Of The Dead in the title.
Now I love British comedy, I'm a proud Brit myself, and I have been on that lads holiday in the past.
I know what goes on in nightclubs, bars, and dodgy sales girls getting you into bars, to only find out they are a pile of shit.
This film is that equivalent, a promise of something great, look inside you'll love it, then it is an empty room of broken promises, with cheap rip off booze and dingy lighting, hiding the ugly folk.
A film that stars Emily Atack is always one to watch, the gorgeous actress who played Charlotte in The Inbetweeners, she is gob smacking, drop dead gorgeous, in this unfortunately the best character  in this, to have her turn into a Zombie, is the down point of this movie, and before you say plot spoilers, her picture is on the back cover in full Zombie make-up.
We have a trio of instantly forgettable characters, the cool guy, but hot, the fat funny guy, who is just too sex obsessed  and the geek, out of their league, in the party capital of sun, sea and debauchery, set after an already Zombie outbreak, that is now under control, except a shady club promoter is shipping the undead somehow into his clubs, for the brutal entertainment of being dissected on sage, for the excitement of his patrons.
Anyhow, blah, blah blah, undead get on island, eat the party goers, island is full of Zombie chompers, only the three escape, whilst battling hardly no zombies, as the film does not have the budget for that, to only have two gore scenes in its complete running time, which in fairness credit when credit is due, are impressive, especially the arm cutting scene.
The film though is so incredibly unfunny, with such annoying actors, that are dreadful by the way, all fake mockney accents, with the I'm a geezer" mentality, all that is missing is the cockney strut  made famous by comedian Mickey Flanagan.
It is just a terrible film,there is no redeeming qualities to this film proving that doing horror comedy is so hard to get right, but unlike Zombieland, Shawn Of The Dead, and Scouts Guide To A Zombie Apocalypse , who surpass in every way, Ibiza Undead is just a film which is just god dam awful, and makes Kevin And Perry Go Large a masterpiece in comparison.
1/5* 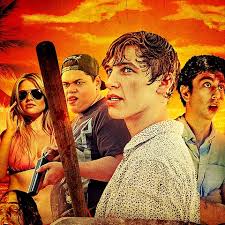