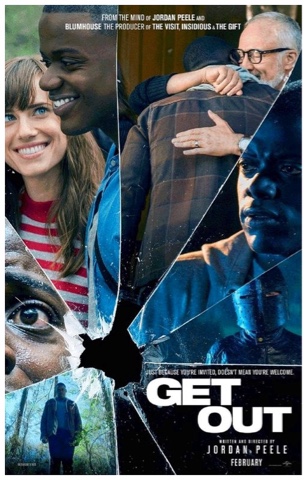 Get Out by Jordan Peele the writer and fellow comedy partner of successful duo Key and Peele
Who were behind last years surprisingly violent comedy Keanu, and various sketches on TV, we have this film that is part comedy, part social satire, and blown out horror, about the stereotypes of interracial relationships. Meet Rose and her boyfriend Chris Who has been dating for 5 months, and it is that time to meet the in laws, the Armitage's, which is a scary prospect in any relationship, but with Chris Being black is concerned that Rose's family may be offended, but it is quite the opposite Rose's family are lovely and welcoming, very liberal towards Chris, so much so, as this acceptance is a little to overwhelming for him.
The fact the Amitage's have what appears to be a black housekeeper Georgina and gardener Walter, to which Chris comments on, to be quickly told, that they were taken on by their grandparents and they never had the nerve to ask them to leave as they are now like family, after the death of the grandparents.
Even more strangely is how they react around him, and not like how he reacts to other black friends, such as his best pal Rodney, this becomes apparent to every other black person he meets who knows the Armitage's, with Rose's mother Missy a trained psychiatrist/ hypnotherapist wanting to help Chris with his addiction to cigarettes, the strange behaviour of the black people in the Armitage's close nit group, puts Chris at an unease, as he believes Missy, Rose's mum is hypnotising these folk, to become modern day slaves, as their behaviour is so odd.
With screams of this movie being rasist is an insult, obviously with supposedly nods to black stereotypes, the so called miss treatment of black people, and relationship stereotypes is a nonsense, the fact it is written by a black man, and the main star is black, why this ever came up is a strange one, then again it is the usual white liberals pretending to be offended that caused the outcry, as this movie is a very clever thriller that's all, that brings up the modern day reactions to interracial relationships, and the fact colour should never be an issue. The modern day slavery thing is something that has easily been picked up on, but this movie has a more sinister motive behind it, and it isn't a racial one at all, and is made quite clear in the film later on.
So do not be fooled by some of the online reviews of this film, whether your black or white you will enjoy this movie, it is in no way racially motivated at all, but is In fact one of the cleverest thrillers I have seen recently, with a white cast involved no one would have batted an eyelid, the fact it has a black actor in the main role, is why some have chosen to be offended for him. The fact that Daniel Kaluuya is such a great actor, and may I say a mightily handsome man, is the reason to watch this film as he is brilliant in this.
Enjoy his performance, enjoy the thriller that this film is, and do not pretend to be offended on his behalf, as this is not that type of movie.
Think of it as Meet The Parents crossed with Invasion Of The Body Snatchers, and you'll be halfway there.
4/5⭐️⭐️⭐️⭐️
⚫️Special features include.
⚫️Alternate Ending, with commentary by writer/director Jordan Peele.
⚫️Deleted scenes with commentary by writer/ director Jordan Peele.
⚫️Unveiling the horror of 'Get Out'
⚫️Go behind the scenes of 'Get Out'
⚫️Q&A session with the crew and cast.
⚫️Trailer. 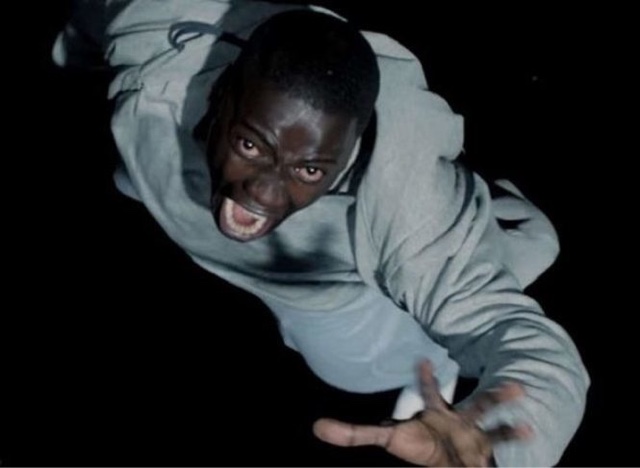