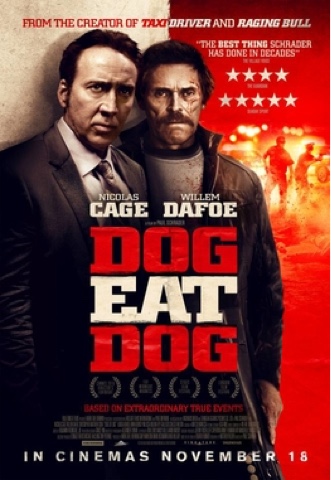 With some considering this to be the worst movie of the year, an arty violent movie, that is far too violent in places and in bad taste, but I liked it, I didn't particularly like the opening, with uncalled sickening violence of a murder of a mother and her teenage daughter by Mad Dog ( Willem Defoe) that takes you simply by surprise.
The dialogue is completely off field, even the content matter when it gets going about a kidnapping of a baby, that goes disastrously wrong, where the person they are meant to be blackmailing and collecting the ransom from, they blow his head clean off his shoulders leaving them on the run from the other mob boss.
With all on two strikes meaning if they are caught they will have to spend time in pokey for the entirety of their living lives the threesome Diesel ( Christopher Matthew Cook) Troy  (Nicholas Cage) and Mad Dog ( Willem Defoe) realise that they will all go out guns blazing rather than being caught from the fuzz.

Directed by Paul Schrader the writer of Raging Bull and Taxi Driver, who has had 40 years of acclaim from two of the best films made, but he ain't no Martin Scorsese behind the camera, with this film looking like a complete mess, with unnecessary edits, black and white scenes, to neon palettes, a complete mind fuck of a film reminding me more of Revolver the dreadful Guy Ritchie movie rather than Pulp Fiction.
With an excellent performance saving this movie from Willem Defoe who is a complete psycho, reminding me more of Begbie from Trainspoting, Nicholas Cage doing his best Nicholas Cage impression, but being slightly portly and overweight, his wig is the worst I've seen in a while, but his suits are cool though.
A film that clearly belongs to Defoe, and being the most interesting character, the film does plod along slowly, with scenes that do not follow from each other making sometimes no sense whatsoever, is why this movie confused so many people, but my god the violence is top notch, the end shootout is particularly gruesome but very shocking to the loss of innocent lives, which kept me awake after watching this movie. It is strange, it is violent one of Cage's strangest films in some time, but if you are like me and enjoy weird films such as The Greasy Strangler, anything by David Lynch especially the new season of Twin Peaks you will like this.
3/5⭐️⭐️⭐️