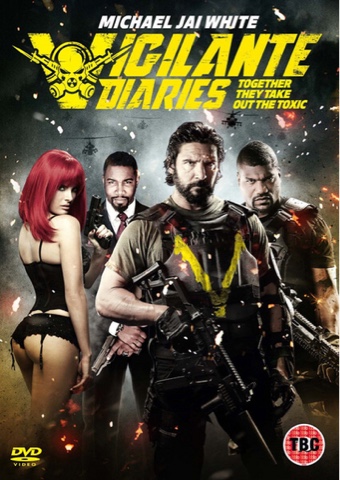 Vigilante Diaries film review 2016.
Silent Bobs friend should stay silent as this pile of turd from Jason Mews is just fucking terrible.
From the web series of the same name, then made into a mini series that was cancelled so they made this pile of turd.
A film that makes no sense whatsoever, and actually looking like all the web series edited together, in the hope that we as film watchers might not notice. Starring Michael Jai White, and a cameo from Michael Madsen cannot save this mess of a film.
With stupid names for the vigilantes such as Wolfman, The Kid, Tex-Mex, The Geek, The Lion, Hollywood, Gay Barry to name a few.
We have a story about an ex solider who is now named the' vigilante' who eliminates the brother of some cartel leader, mix in some Armenian
gangsters, dodgy government agents playing both sides, and a video blogger caught in the middle, and we have this excuse for an action film.
It has some violent scenes , I'll give some credit, but with effects stolen from Minority Report, stupid set pieces and ridiculous names for special forces soldiers. Good looking women and great boobs, and even hotter ones playing the bad guys still couldn't hold my attention.
A film if I was 13 might enjoy " mmm boobs, blood, guns" but then again I'm 44 got more brains in my head, which this film was an insult to my intelligence.
I suppose if you have a few male friends round on a Saturday night and want a film to watch whilst getting absolutely bladdered on alcohol this may fill the time otherwise if sober like I was whilst watching this just don't bother.
💩/5