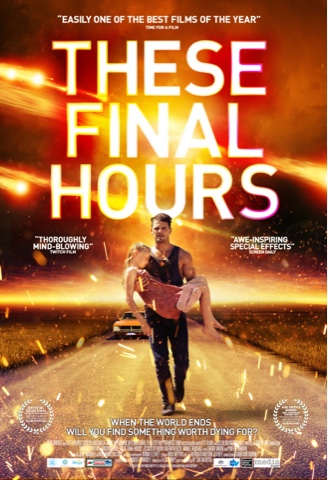 I saw this last night, and it has to be one of the most depressing films, but also filled with human emotion and redemption. What would you do if you knew your life and everyone else's will end within 12 hours, after a apocalyptic comet hit the earth in the Northern Atlantic, creating a blast wave of fire and brimstone that will literally destroy all life on earth, with it destroying half the Earth on impact but living literally the other side of the world Australia will be hit last by the blast wave.
We hear one solitary voice on a pirate radio band giving a commentary about the end of the world, and as the cover on the DVD says can one selfish man find his soul well this has to be the most powerful film about redemption, it is hard to review the film without giving away the final reveal but my god is it powerful.
The story of one man James ( Nathan Phillips)  who gets scared from responsibility, and runs away from his girlfriend because of commitment issues, and decides to end his life going to the party of all parties, a drug fuelled alcoholic orgy of mayhem. Some how fate gets involved and he rescues a teenage girl about to abused by two pedophiles,  Rose ( Angourie Rice) who has become seperated from her dad, and wants to be with him at the end. We have a road movie that is quite simply amazing, that shows this man is no selfish human being but a great man who is just floored.
This film is upsetting on so many levels as we see all parts of human emotion, we see scenes of mass suicide, psychos carrying machetes who just wants to kill, and now no one will stop them, scenes of mass sexual activity, drug taking, people doing anything to avoid the one thing everyone dreads and that is death.
This film although a very hard watch, it really is hard to describe a film that is so depressing, but comes across as being so beautiful, with outstanding performances from Nathan Blake and young actress Angourie Rice, a film that really shows how to do an aplocalyptic film, that puts any Hollywood movie to shame.
Australia is really impressing me with their filmmakers recently, what with the excellent Wolf Creek TV series, The Babadook, The Pack, Predestination, Mad Max Fury Road to name a few.
These Final Hours really is a remarkable film, a film that really moved me, is beautiful whilst being depressing, quite simply just perfect film making at its best.
5/5⭐️⭐️⭐️⭐️⭐️