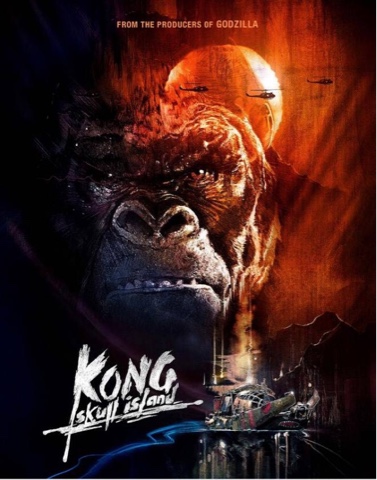 You know I'm ashamed to say, with this being a Hollywood blockbuster, massive amounts of money spent on it, and myself being slightly anti Hollywood, I enjoyed this movie.
A movie that was made to be purely enjoyable, and it was, also it has such a homage to so many other films, including sci fi, horror, anime, and obviously Vietnam war films of the seventies and eighties, at least referencing Full Metal Jacket, Apocalypse Now, Platoon, shit even Taxi Driver, and Alien from the seventies get a nod of some kind. With anime nods to Akira, Spirited Away and also  Pokemon, with the best reference is the spider scene when a Solider is impaled by a leg, going straight through his mouth, which is a reference to the scene of that woman impaled in Cannibal Holacaust.
With other references to other Kong movies, even the dodgy ones, has a scene that has been recreated, the octopus battle, Kong in chains, and the T Rex battle from King Kong 2005.
With the biggest influence  of all is Apocalypse Now, down to the helicopters, the boat scene, the villagers, and of cause copious amounts of napalm, with the perfect seventies soundtrack even borrowing the same songs used in previous Vietnam war movies.
Honestly this movie is just pure joy, seeing copious amounts of soldiers being ripped apart, stamped on, eaten by various beasties, we actually have a more violent Jurrassic Park movie, with balls to show violence, even my teenage daughter was equally enthralled by the violence and shocked by it, with her shouting at the screen "rip his tongue out" with the final battle between Kong and some huge underground demon known as the Skull Crusher.
The other highlight and I'm warning you is spoiler, but then again you kind of expect it now, is the violent death of Samuel L Jackson, who has to die a gruesome death in every type of monster movie he has starred in. With his referencing Predator of all movies, with the burning torch egging on his adversary in Kong.
It does pain me to say that I enjoyed a Big Buget Hollywood Blockbuster, but with such great visual effects, a great seventies soundtrack and my favourite decade of music, to the Vietnam films I grew up with in the eighties, and a great cast of Samuel L. Jackson,  John Goodman, Tom Hiddleson, Brie Larson and  John C. Riley who is one of my favourite actors.
I really did enjoy this movie, and although is not pure horror the action set pieces, the violence, you even see blood, makes this the most violent PG13 movie I have ever see, all plaudits has to go to director Jordan Vogt-Roberts, who has kickstarted off Warner Bros own Mosterverse with Godzilla 2 next and then a Kong, Godzilla movie, with a naughty post credit sequence hinting that, with a nod to Godzilla fighting other monster beasties, saying" this was once their earth" we have a lot of monster movies to look forward to in the next few years, and if they are all as good as this movie, for once I'm excited.
3/5⭐️⭐️⭐️
Bluray special features include 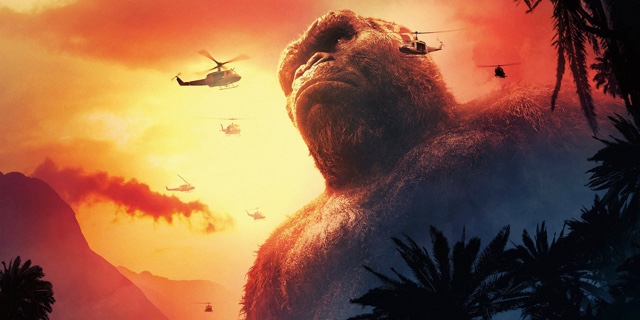