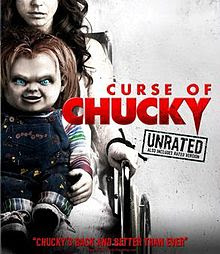 Curse Of Chucky 2013 brought to us by the original creator of Chucky and the whole Good Guys Dolls, Don Mancini  has taken control of the franchise and brought it back to reality.
Gone are the camp Bride Of Chucky and Seed Of Chucky, and once more we have a movie that is as frightening as the first Childs Play directed by the great Tom Holland.
Once again Brad Dourif returns as the voice of Chucky, but strangely his daughter in real life Fiona Dourif plays quadriplegic Nica Pierce who lives with her depressed mother, who one day gets a surprise package through the door, a retro Good Guys Doll, although the mother drops it in the bin, hours later the mother is found dead with stab wounds, which Fiona and the Police assume is self inflicted due to her suicidal nature.

It then becomes a tussle between Nica and her elder sister Sarah (Chantal Quesnelle) wanting to claim the house because of the debt, and financial troubles she is in.
Bringing her family to the old family house where Nica  lives, bringing her husband Ian (Brennan Elliot) daughter Alice( Summer H. Howell)and nanny Jill (Maitland MacConnell)  much to the displeasure of Chucky,  and a bloodbath of gore is inevitable.
This movie I can genuinely say was really creepy, it really had me on edge, Chucky was equally as freaky and sweet at the same time making an uneasy viewing experience, Brad Dourif was absolutely spot on again, but then again so was Fiona Dourif who was outstanding as Nica, but then again she is the most interesting characher in the TV series Dirk Gently's Holistic Detective agency.
This film is brutal with some of the best onscreen kills in some time, including a partial decapitation, a brutal throat cutting scene and an eye gouging scene that is squirm inducing.
This is a film that I had been avoiding after the disappointments of previous films, but I was so wrong, this film is actually bloody good, as good as Child's Play 1988 and the link to it was just genius, a really good violent film, that is actually quite scary, that has left me wanting more and cannot wait till October for Cult Of Chucky.
3/5*** 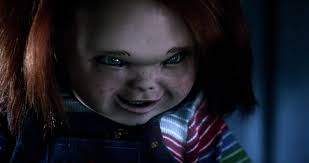