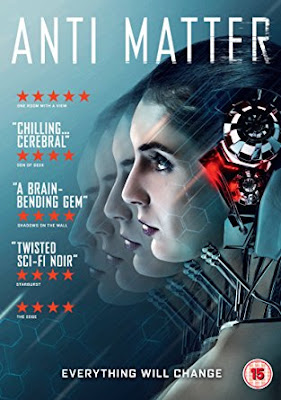 Anti Matter or also known as Worm which is currently holding 100% on Rotten Tomatoes, a micro budget film that is showing all the bigger studios how to make Sci Fi and make it bloody interesting.
Like Primer and Coherence before, it proving a film with no stars or major money financed behind these projects then showing up every other film maker how to make a well constructed film with an interesting script, that will put  Hollywood to shame.

Now I'm not going to bore you with the science behind this movie, and in fairness unless you have a degree in quantum physics you will not understand, but put in simple turns three scientists open up a wormhole temporarily that enables them to move matter, with the scientific break through of the century and desperately needing funding, Anna volunteers to pass through the wormhole, to then have devastating effects.
After passing through Anna is unable to make new memories, loosing any appetite seeing various visions, paranoia after the experiment.
Anna then starts wondering if she has left something behind in the wormhole, as she no longer feels whole, with dreams and visions of her doing things without her knowledge, being in many places at once, and her co workers are treating her with suspicion, and distance.
The question is what did happen to Anna as she passed through the wormhole? did she leave a part of herself behind, with a very spiritual question being asked, if we are just matter, what actually is our soul, is it memories, or simply something that science can not answer, with Anna believing her soul was left behind in the darkness, as matter can only pass through the wormhole, and our spiritual being is lost forever, and is it the soul that is your personality, and your body is just an empty vessel, or just matter.

This is one of the most interesting movies I have seen and reviewed this year, although not as mind bending as Primer and Coherence, the twist is still spectacular, with a truly strange ending that is still outstanding without being a cop out.
With a great script and direction by first timer Kier Burrows,  with surprising confidence in his own movie is why this film is so special, a must watch.
4/5****
DVD contains Deleted Scenes.