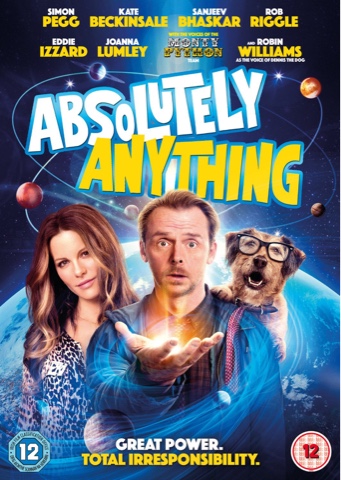 Following on from my Monty Python theme yesterday we have this zany sci fi comedy from Terry Jones, with the cast of Monty Python involved in this movie.
What if the whole universe is controlled by Supreme Beings, an alien being that is so god like, has the power to control worlds, and destroy them at any time. What if Earth is next on their destroy list, as we are sometimes such a savage race, and do not appreciate the planet we have and live, we have a few days to prove our worth and our humanity. One person is choosen to have incredible powers to use it for good, and then and only then can humanity prove they are worth saving.
So teacher Neil Clarke (Simon Pegg) has the supreme power, to change the world,but unfortunately uses his powers for typical selfish reasons, to get the girl he likes, to get rid of his annoying class of teenagers, to make his dog intelligent and talk, but still thinks like a dog and only wanting dog biscuits, we have zombies, poo jokes very dark comedy, think Bruce Almighty written by the Monty Python team, and this is what this film is.
Unfortunately it isn't that good, Infact it is an insult to your intelligence, Simon Pegg does try his best from an awful script, Kate Beckinsdale is just collecting a pay cheque, Robin Williams in his last film role before his unfortunate death in 2014, their is no spark in his voice, and can clearly tell in this movie,  like he really cannot be bothered, and even his voice seems depressed in this, not the same zany voice over we had in Aladdin. Even the voice talents of John Cleese, Michael Palin, Eric Idle, Terry Jones cannot save this movie. Admittedly it has moments that I did chuckle and find amusing, you would have to have no sense of humour not to find some scenes funny, but it is written by Jones. and the humour is stuck in time unfortunately, offering nothing new, it is almost like The Pythons had reformed, but now was not funny, and the thought of that is a dreadful one, and the reason why their humour should stay in time 4 decades ago. The film has its moments and is funny in parts, but other parts are just cringe worthy I'm afraid.
2/5⭐️⭐️