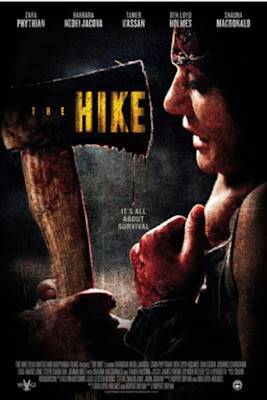 I watched this last night in the UK on The Horror Channel, my first thoughts another survival in the woods type movie, yes I forgave the bad acting early on as I knew it wasn't going to get better, I forgave the cliché of good looking women going hiking in skimpy shorts. What I couldn't forgive is what this movie wanted to be, a slasher? a survival movie?, a torture porn movie? a film that tried all three and failed miserably, it was neither shocking enough, or even violent enough.
Even with scenes of potential rape, there was no tension, the bad acting just made it worse, it wanted to be shocking but pulled away pardon the pun on every scene. The violence should have been shocking, but ended up with the camera panning away. Now I'm not condoning violence in any way, but it is the reason why we all like horror, and this film was neither shocking or gory enough to promote any reaction. Watch Last House On The Left, or even I Spit On Your Grave remakes, and they show you how to be sickened by a scene. This film wanted to be the British equivalent but failed spectacularly, although I will give plaudits to a very good ending. Is it worth watching well if streaming or buying a big fat no!!! But if you live in the UK and with The Horror Channel free on Free view give it a go, it ain't Eden Lake, I Spit On Your Grave or Last House On The Left, but it is not the worst movie I have seen either, the acting is appalling, the violence is mediocre, but the ending is clever, and deserves at least an extra star.
Plot summary:
An army veteran discharged from the army reconnects with her old friends and go on a hiking trip. Meeting three other men who are climbers they hit it off. Things take a dark turn when the men have other motives, and it becomes a battle of wills and their lives to survive the trip in the woods.
2/5⭐⭐