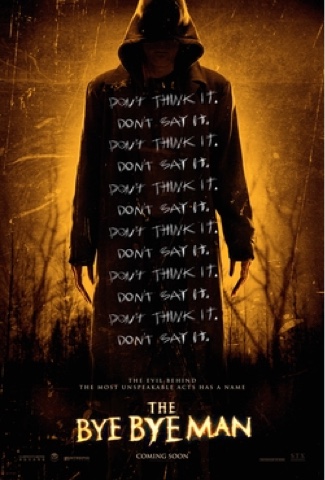 Starring Douglas Smith. Lucien Laviscount, Cressida Bonas, Michael Trucco, Jenna Kanell, Cleo King and Carrie-Anne Moss and Faye Dunaway. Distribution by Entertainment In Video, running time 92 minutes, certificate 15.
I'm going to really controversial by saying I'm one of the few people who enjoyed this movie, and cannot understand the hate towards it. Another Urban Legend type movie, in the vain of Candyman, and Sinister, a tale of a boogeyman, that when you hear his name will haunt you, and make you do unspeakable things. With the Title "Don't Think It, Don't Say It, once his name has been spoken aloud all who hear are cursed, and all suffer the same fate of horrible visions, dreams, and the only way to stop him, is to kill yourself, and anyone who has heard his name, like cutting out the cancer before it spreads. The film is based on the chapter “The Bridge to Body Island” in Robert Damon Schneck’s nonfiction book The President’s Vampire, a  collection of short stories about Urban Legends, with this one an interesting tale, of the Urban Legend being far more scary than the film.
Set in Appleton Wisconsin, three youngsters in the early nineties raise a spirit whilst using a Ouija board, the sprit is of an Albino man in the 1920's bullied and vilified, with rage and anger becomes a killer, by killing a nurse looking after him, he then grows up and spends time on a train, looking for random victims, which he kills, and collects their skin, in which he makes a companion, a dog named Gloomsinger made out of the skins of his victims. The three teenagers were apparently unsettled by terrible dreams after the Ouija Incident, but no harm came to them. This story thought to be real turned out to be an Urban Myth, and the Ouija incident never happened, but this was the apparent starting of the Urban Legend The Bye Bye Man.
This film is set in the same setting of Appleton Wisconsin, the reason this film was close to my heart is because it is where my Brother and Sister in Law live. A story of three college grads who rent and share a house, that had a history to it, but is not disclosed by the landlord to the tenants, it belonged to a journalist who went on a shooting spree in the sixties killing five including himself, the incident was never reported in any local news, and was kept quiet like it never happened, as it appeared he had been investigating the origins of The Bye Bye Man, which turned him crazy, and he killed all his friends and neighbors who he told about the Myth. Unfortunately for the three grads they find an old bedside table belonging to the journalist in the basement, and open the drawers, to find a piece of paper inside with scribbled on writing reading "Don't Think It, Don't Say It, then the name The Bye Bye Man is shown, which is disclosed to all three, and they are all pursued, and haunted by this being, who manage to turn the three on themselves, with hints of infidelity between the three close friends.
With the tag line on the cover that says People do unspeakable things, what if these unspeakable things were controlled by some being, to explain the actions of normally sane people.
The film offers nothing new to the genre, but I still found myself enjoying this movie, with it reminding me more of Sinister, another film that I really recommend. With this film not being extremely bloody, with very few scares, at least it doesn't rely on jump scares to create tension.
A film that although not terribly scary stays with you afterward, just like Sinister did from 2012. This film will undoubtedly have multiple sequels which will spoil this great movie, but with this movie being directed by Stacy Title a great female director who made one of my favourite dark comedies in the mid nineties The Last Supper, that starred the late great Bill Paxton, and Cameron Diaz before she turned to rom/coms, a brilliant film about bigotry, and what if you invited people to dinner with the opposing views to you, and if yourself and friends disagreed with their views, they were killed, hence the title The Last Supper.
She hadn't made many films since, but I did like Bye Bye Man, so if I'm the only person to sing its praises I will, as I enjoyed this movie, and isn't that what movies are about, escapism and enjoyment, well I enjoyed this movie, it was well acted, by non annoying young actors, had some great uneasy scares, and a story I really enjoyed. My only downside is the whole back story of The Bye Bye Man should have been explored more, with scenes of the train making no sense whatsoever, you need to read up on the myth the Bye Bye Man to get that part, apart from that part not being explored, the myth needed greater depth, this movie is still a good addition to any horror film fans library.
3/5⭐️⭐️⭐️ 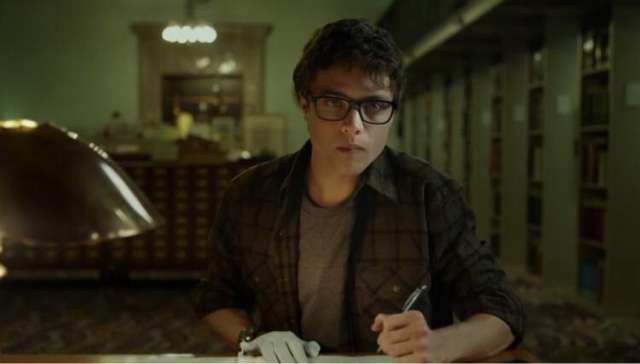