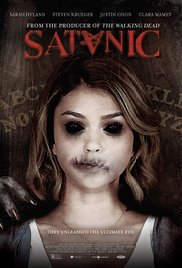 Satanic plot summary:
Four college coeds on the way to Coachella decide to stop off at LA to visit Santaic haunts, made famous through history. They unfortunately on route take in a homeless stranger, who they feel sorry for. Which is a terrible mistake as they are tricked into somehow managing to invoke and then sell their souls to the Devil.
Starring Sarah Hyland, Justin Chon, Steven Krueger,  Clara Mamet, Sophie Dalah. Directed by Jeffrey Hunt ( Vampire Diaries fame) in a film that has been hated, slated, and just about torn apart from all critics, and in all fairness they are right as this movie is bad, but and a big but, it is actually enjoyable, with a great ending. In all fairness I did guess the twist, but it is still clever regardless, you do need to pay attention to some of the dialogue early on to understand, one crucial point is when Sophie Dalah ( Alice) says " hell is a beautiful confusion "
The film only 73 minutes long spends almost 40 plus minutes in character development, leaving a window of just about 20 minutes to cram all the horror bits in. The scares are predictable, and lame,  with no decent scares, using tired old tricks like seeing loads of cutlery stuck to the kitchen ceiling, dead birds scattered along the floor. We have no sense of dread throughout this movie, with some bad dialogue throughout, although it is well acted, the script is bloody awful, as I said the ending does improve the film slightly, but only slightly. With strong performances from Sarah Hyland  ( Modern Family) and Sophie Dalah ( Unbroken) still cannot save this from being completely forgettable.
We have a director in Jeffery Hunt who clearly loves LA with most of the budget spent on expensive Ariel shots of the LA skyline, which is intercut between scenes, that make no editorial sense, hey ho if the budget is spent on a helicopter why not keep showing the Arial shots.
It is a one star movie, but I did like the ending so it does upgrade it to 2/5** 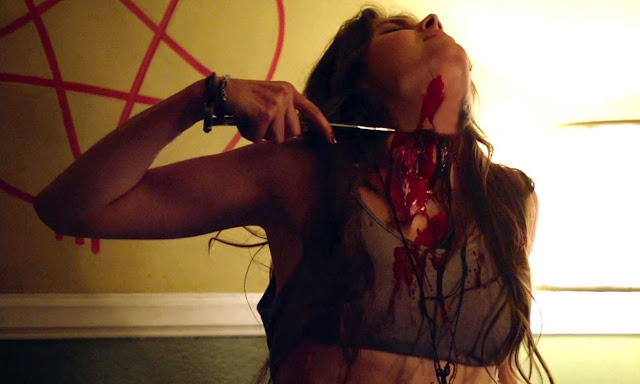