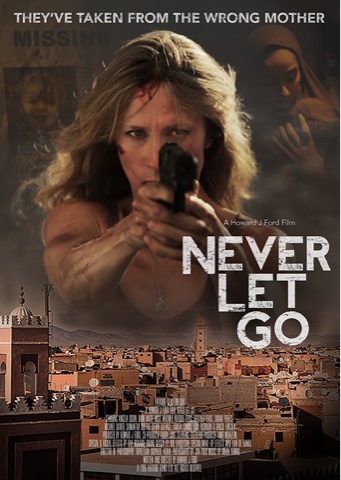 A film I saw the trailer for just before Christmas, but thinking it's just another Taken style action thriller, never really gave it a second thought, well it is now streaming on Netflix so I watched it, and you know I will admit I was so wrong, for a low budget British made film, the film puts most if not all US thrillers to shame. Starring Angela Dixon, a little known Indie actress, who deserves to be seen at a larger level, although being an actress She is an established Yoga instructor in the UK, so she is fit, and not just in the looks department but my goodness me the amount she runs, jumps parkour's like a professional, puts Liam Neeson late fifties Brian to shame. A film that if you didn't know about a mothers love, and the things they are capable of, a Mothers bond is so strong, which is shown to perfection in this movie.

Plot summary;
Angela Dixon plays Lisa, a single mother traveling to Morocco with her gorgeous baby girl, blonde  hair blue eyes, we believe Lisa to have had issues in her life, from a personal tragedy early on, as we see flash backs of a car accident, we are lead to believe she is already a fragile woman, but how wrong we are to make those assumptions when her beautiful baby girl is kidnapped in broad daylight at the beach by a gang of people traffickers, she goes on a one woman violent crusade to get back her child. Stuck in a foreign country, with the police already assuming she is a suspect in a murder in plain daylight of one of the people traffickers. Did I tell you that Lisa is on leave, as she is CIA trained, in arms, combat, and general kicking the shit out of you.
Now I loved the original Taken I thought it was a breath of fresh air to the action genre, unfortunately ruined by unnecessary sequels that even Liam Neeson was bored of doing. That is why the comparison is always going to be there for this movie, it even has on the UK DVD cover " this years Taken!!" But this movie is so much more, and proving a woman's love is always unconditional, she actually seems more determined, more dangerous, more vicious in her revenge whilst looking for her baby girl. The film is violent we have bones broken, a man run over by a car, various headshots, a diy sewing scenes straight out of the Rambo movies. A straight out action movie that is the best I have seen, and for once starring a brilliant lead in the form of Angela Dixon, she shows every emotion, the determination, the frustration and the fact that women are not the weaker sex, and are Infact our equals, a fantastic movie, that I really can recommend.
3/5⭐️⭐️⭐️